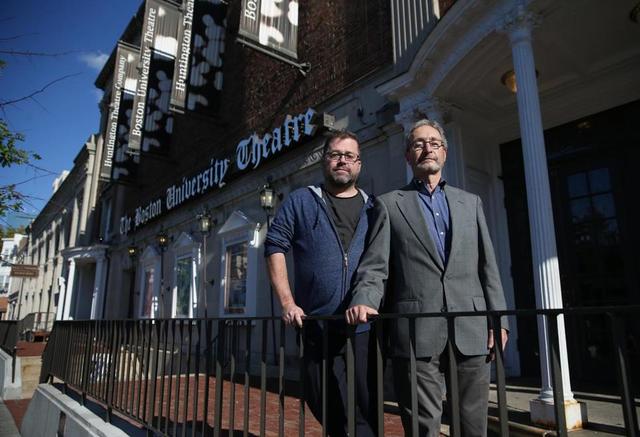 Built in 1925 by Henry Jewett, an Australian actor. Successful repertory theater during its early years, later becoming a movie theater (the Esquire), which operated until 1958. Currently, the Boston University Theatre is home to the Huntington Theatre Company. It was renamed Huntington Avenue Theatre on July 1, 2017.

One of the buildings that will be demolished and replaced with new development is the former Symphony Cinema.

According to today’s Boston Globe, this theatre will be renamed to Huntington Avenue Theatre on July 1, 2017, to reflect the fact that Boston University will no longer own it.

Also, the Huntington’s scenery, prop, and paint shops will be moving to a warehouse in Everett.

The development group that owns the BU Theatre complex, longtime home of the Huntington Theatre Company, filed plans Monday for a gleaming 32-story apartment building that will rise 362 feet over Huntington Avenue, transforming that neighborhood and the theater that bears its name.

The tower, which could house as many as 426 units and will feature ample retail space, is being proposed by developers QMG Huntington LLC in a deal that would give full ownership of the 870-seat playhouse to the Huntington Theatre Company. Rising on a site adjacent to the theater now occupied by two smaller buildings, the tower would include an airy two-floor lobby at its base, enabling the Huntington to offer enhanced patron amenities, a cafe, a bar, and flexible event space that could be used for lectures, community meetings, or theatrical performances, including by outside groups.

The print edition of today’s Boston Herald has a feature article about the planned building with 2 “shopped” photos of the site. The new building’s facade is stepped back slightly so that it adjoins the facade of the theater. There will be a lobby entrance in the new building, plus a theater cafe, and a second floor foyer, event space and even an open-air balcony overlooking the street. The theater name will be changed to “Huntington Avenue Theatre” on July 1st.

The news that the new building next to the theater will have an open balcony for theater patrons, weather permitting, reminds me of another Boston theater which had such a feature: the Shubert across from the Wang Th. on Tremont St. At the north end of the corridor behind the second balcony there was a small open terrace which could hold about 20 or more people during intermissions. Most were smokers, as smoking was very common back then (1940s-50s). I went out there many times and there was a good view from the railing of the Met across the street, the Wilbur, and the Plymouth/Gary Theatre. 2nd balcony tickets for Saturday matinees cost only $1.20. I used to go with my older brother, or with friends from school who were both movie fans and stage fans. We liked the very popular musicals of that day, such as “Oklahoma!”, “South Pacific”, “King and I”, “Guys and Dolls”, “Gentlemen Prefer Blondes”, etc., and also the revues, such as “New Faces” and “Ziegfeld Follies”. The difference between going to the movies and going to live shows was that buying tickets in advance was a must, and you had to dress up in jacket, tie and shined shoes (no jeans and sneakers). They used to play the national anthem at the start of the show, a practice which died out after the 1950s. (They still play it at sports events).
These shows were 100% acoustic, with no “mics”.
Another theater with an open terrace upstairs is the State Theatre at Lincoln Center in New York.

There was an earlier “Huntington Avenue Theatre”. That was the original name of the Strand Theatre at 175 Huntington Avenue which was a popular neighborhood cinema which lasted into the 1960s. Its name was changed to “Strand” about 1921.

I suspect this name will be temporary until a donor comes along who wants to give enough to put his or her name on it.

There is a “Public Notice” in the legal ads section of today’s Boston Herald placed by the Boston Redevelopment Authority (Boston planning agency) advising that the theatre project is going forward. The existing buildings at 252 and 258 Huntington Ave are to be demolished and replaced with a 32-story tower with residential above and commercial space below. The theater is to be renovated, and the theater annex in the rear is to be demolished and replaced with a new annex 5 floors high, with 2 basement levels. No time line for this work.