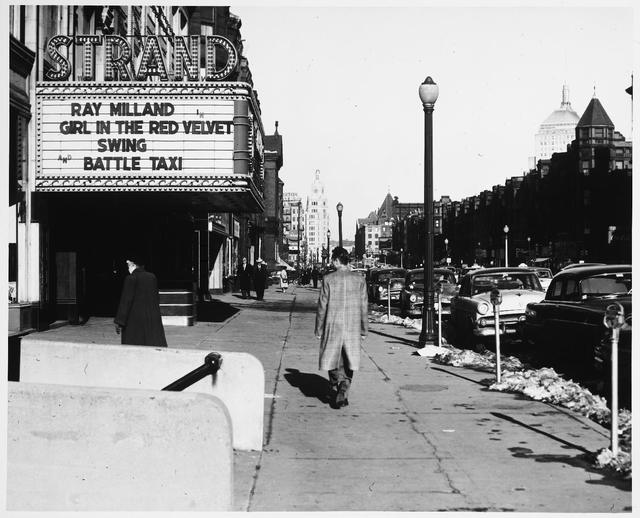 The Strand Theatre was located on Huntington Avenue, next to, and surviving, some of the construction of the Prudential Center. As the “Pru” got close to opening, the Strand Theatre became history.

Here’s another map of the area from 1917. WardMaps.com is a great map resource and they have many years of Boston real estate maps. They also run a free online forum. If you post a request to see an address they’ll post full res details of that address from all the years in their collection! Pretty cool.

Their forums are here: http://forums.wardmaps.com

The MGM Theatre Photograph and Report form for the Strand on Huntington Avenue has an exterior photo taken in May 1941. The theatre had both a marquee and a vertical sign. On the front of the marquee, underneath the name, are 3 lines of dark letters on a white background reading: Double Feature Program / Selected Short Subjects/ “Goodwill Award” – Thurs. Nites . There are 2 large vertical poster cases right out on the sidewalk, near the curb, and these appear to be supporting the outer edge of the marquee. To the right of the Strand’s entrance, in the next building, is the Strand Fruit Co. store. The Report states that the Strand has been playing MGM product for over 10 years; that it was built around 1900 (incorrect); that it’s in Fair condition; that it’s a “Nabe” (Neighborhood house); and has 513 seats on the main floor and 425 balcony seats, total: 938 seats.

I attended the Strand many times in the 1950’s and early 1960’s. The auditorium was fairly ornate but the lobby areas were modest with low ceilings. At that time the theatre was not maintained very well, in stark contrast to the gorgeous Lowe’s State and Uptown and even the Fenway. It seemed to be about half the size of the Uptown, which had an enormous and seldom used balcony. Children were admitted for a dime, reduced from twelve cents in the early 50’s, but had, if not accompanied by an adult, to sit in the left corner of the balcony under the watchful eye of an usher. However, we could always move to the orchestra after going downstairs to buy something from the concession stand or to go to the bathroom. The last time I attended the Strand may have been for a double feature of Ben-Hur and Spartacus, perhaps in 1961; this was affordable entertainment, at less than two cents an hour!

The Strand is listed as the “Huntington Avenue Theatre” at 175 Huntington Avenue in the street directory of the 1918 edition of the Boston Register and Business Directory, Issue 83. Mechanics Hall was just to the east at # 111. It was a major convention center in Boston right into the 1950s.

When the 1921 edition of the Boston Register, Issue 85, was published, this theater’s name had changed to “Strand”.

Here’s a 1938 map showing the Strand – and the Strand Ballroom. I included part of the CS church to help locate the theater.

I took a further look at the property. In 1902, the Woman’s Club House was on the site. It looks to have been a headquarters for different Boston women’s clubs. In 1917, the building is called the New Century Building, and houses on one side the Huntington ave Theater, and by 1938 it’s the Strand Ballroom Bldg and the Strand Theater.

Yes, the May 1941 MGM Report photo clearly shows “New Century Building” spelled out on the facade above the second-floor windows. The Strand entrance and marquee were located at the right side of the building front.

The marquee from roughly the mid 50s: View link

A shot of the marquee early in its lifetime when it was showing live acts… http://billnoonanfirefotos.smugmug.com/Historicphotos/real-old-days/17392592_ZGP4wR#1347522527_Q6RfD92-O-LB