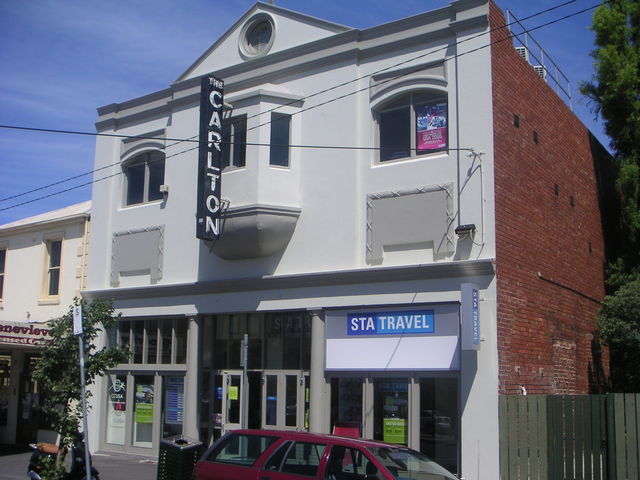 Located in the Melbourne inner-city district of Carlton. Originally built in 1909 as a hall and meeting room for Carlton Trades Club. It became a billiards hall then a Jewish club.

In September 1923 work began on alterations by architect Gerald M. Ryan to convert the building into a cinema. Seating was provided for 472 in the stalls and 182 in the balcony and it opened as the Carlton Picture Palace on 14th April 1924. It was operated as an independent cinema for all its cinematic life.

Some alterations and improvements were made in 1979 when it became known as the Carlton Movie House and it re-opened on 3rd August 1979. It closed in June 1999 and was converted into a travel agency (STA) and offices. STA moved out in early-2012.

My career as a director got off to a flying start when the owner Gordon (can’t recall surname) ran my 30 minute drama “One Man Bike” as a support for Fellini’s 8 ½. How cool did that make you feel? More power to the independent cinemas. Haydn Keenan.

The building is now a vintage clothing store(Yesteryear Retro), a hamburger restaurant(New York Minute), and a graphic designer(Grosz Co Lab).

The Exhibitor who ran your 30 minute featurette (One Man Bike) was the late Gordon McClelland. His family ran the Carlton Cinema from 1924. Gordon was a highly respected member of the Cinema Industry & a great supporter of Independent film-making, and a valued friend of this writer – Gordon McClelland, together with the late Baz Brownbill of the Pix Theatre Geelong, pioneered class-room school screenings in Victoria, utilizing 35mm portables – Contributed by Greg Lynch –