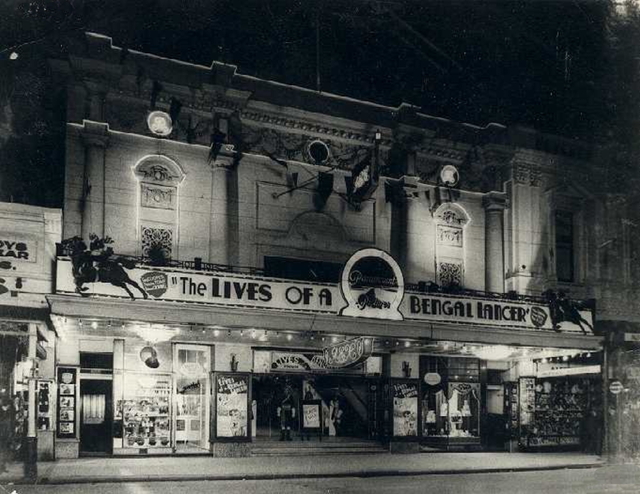 The Rex Theatre, a few doors along from the Regent Theatre, officially opened as the Pavilion Theatre on June 22, 1912. A year prior to its opening was another theatre on that same site, the Arcadia Picture Palace, which opened on July 2, 1910, closing just seven months later on February 11, 1911.

In the late-1920’s, the Pavilion Theatre closed for a time and was used as a mini-golf course. In 1933 it was reinstated as a cinema and opened on 31st March 1933 as the Rex Theatre. The opening attraction was Paramount’s “The Big Broadcast” with Bing Crosby. The Edwardian style façade was not changed very much, except a new balcony verandah was added to allow patrons access to the balcony from the upstairs circle on balmy nights.

During the late-1930’s, the theatre was purchased from Union Theatres by a local Adelaide shopkeeper, who ran a few cafes around town. The original façade was replaced with an Art Deco style ‘Moderne’ front and new signage. Inside the theatre, the width of the original orchestra pit was covered by three steps which lead to the stage, and on either side were half-round steps fitted with glass tops through which indirect lighting lit the inside of the proscenium arch. In front of the French-action curtains were concealed footlights. For the first few years Paramount features were mainly shown. Set in the ceiling of the auditorium were three large indirectly lit centre domes. On really hot nights the roof could be opened to allow the cool breezes to blow through the theatre.

In 1940 the Rex Theatre could seat 1,100 patrons. The theatre then became famous as a second run house, most often as a move-over from the nearby Regent Theatre. In 1955 the theatre was bought by a neighbouring department store who wanted to expand onto the Rex Theatre site. Hoyts lease was expiring and the Rex Theatre closed on 12th February 1959 with Shirley Temple in “Curly Top” which completed a four week season. The Rex Theatre was never equipped with CinemaScope.

Cox-Foys the owner of the theatre were not ready to expand their department store, so Celebrity Theatres Ltd. who ran the Majestic Theatre obtained a lease on the Rex Theatre. It reopened with a Gala performance on 15th May 1959 with a Paramount double bill “The Sad Sack” and “Zero Hour” screening simultaneously with the Majestic Theatre. The theatre had been repainted and a new specially imported CinemaScope & VistaVision screen had been installed. The dual theatre release was a great success with over 10,000 admissions over the opening weekend. Foreign films were screened in 1960, followed by first run release films from MGM while their Metro Theatre was showing “Ben Hur” for a 27 week season.

The Rex Theatre was closed on 29th July 1961 with “Black Orpheus” after a three weeks season. The contents of the theatre were auctioned off two days later, grossing less than 2,000 Pounds.

After demolition, the Cox-Foys department store was extended westwards towards the Adelaide Arcade. The department store has since closed with the building now housing lecture theatres, a health studio, with retail on the ground floor and first floor.

I cannot believe that such beautiful theatre can be demolished.
Raymond Lo/4th June,2005

Living in South Australia all my life I cannot remember this theatre and especially only a couple of doors away from my old favorite Regent which recently closed (that is a huge lose) to S.A.
I can remember sitting on a Sat Night at the Regent and seeing the Big Burgandy Curtain going up followed by the Gold curtains behind it.
When the Theatre was divided up I crept in and still remember the workman tipping the organ pipes up and the main chandelier wraped in plastic. I also had a little look in the Melbourne Regent when it was updated. Oh well we still have it. So long to the Adelaide Regent a real sad lose it was sheer class.I think it is now being divided up for retail use. The facia is still there in Rundle Mall

As a visiting Royal Navy “killick” matelot in the early 60’s, I spent a lovely (wet) day in the Regent with a couple of dozen movie-starved sailors.
The manager gave us “head of the queue” privilages and half priced tickets. They were playing a “Carry On” flick and it was one of the funniest ever.
Thank you everyone at the Regent for brightening our day. Proudly wearing our uniform ashore certainly paid off. Nowadays, one never sees any members of the Armed Services in uniform. Aren’t they proud any more?
Here in Hollywood, California, I’m the oldest usher (69) at Disney’s EL CAPITAN THEATRE and still love to spoil the countless visitors!

I was born & raised in Adelaide from early 50’s so i’m sure i had visited as a child but cannot remember ‘The Rex’……. There is another Cinema that is not listed & cannot remember the name…..perhaps someone out there can…….it was around the corner from Cox Foys in Twin Street….it was on the right side & was on an angle…i can vaguely remember my mother taking me there to see'South Pacific'….that slight curve in Twin St is still there near to Rundle mall as its called today.

The Plaza Theatre I saw South Pacific there also.