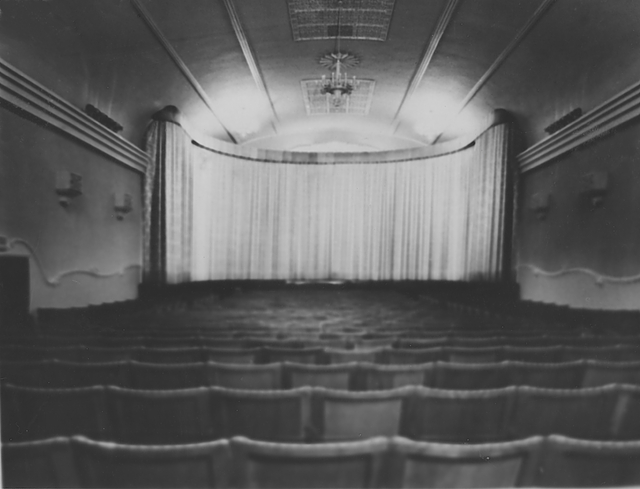 Situated directly behind the Adelaide Regent Theatre, the Plaza Theatre was erected out of the old Embassy Ballroom. The cinema opened on Thursday October 27, 1955 with Katharine Hepburn and Rossano Brazzi in ‘“Summer Madness” (US title: 'Summertime’). Katharine Hepburn was there in person to officially open the theatre. Special sight lines and seating gave the 735 patrons an uninterrupted view of the screen in the one level cinema.

It was the first Adelaide theatre especially built for CinemaScope presentations. The entrance was along a laneway, which ran beside the Regent Theatre. The main decorative motif inside the Plaza Theatre was a bold striking plaster moulding of Pegasus, the legendary winged-horse, curving away on each side of the proscenium. The main programming idea was to screen exclusive British product, but this could not be sustained and ended by June 1957. In April 1958 “Around the World in 80 Days” started its 45-week season in the new Todd-AO process. A new screen was installed, but within the confines of the original proscenium. In November 1959 the Plaza Theatre closed for 10 days for the installation of a new wrap-around screen and curtains which covered up the proscenium and the Pegasus motifs on the walls. The theatre opened again on Wednesday November 18, 1959 with “South Pacific” in Todd-AO, running for 82 weeks.

In February 1966, the Plaza Theatre was renamed the Paris Theatre and opened with its new signage with “The Sound of Music” in the Todd-AO process, lasting two years and three weeks. “The Sound of Music” concluded its long engagement on Saturday May 25, 1968. A few months later, after a few very minor features, the theatre closed with “A Guide to the Married Man” and was completely demolished in late-1968, to allow for the completion of a shopping arcade, which also decimated her beautiful sister theatre, the Regent Theatre.

In April 1969 a new cinema opened on the former Plaza/Paris Theatre site, with Julie Andrews in “Star!”. Known as Regent 2, it was designed by architect Peter Muller. Since that time it has been twinned and was still operating in 2001, but has since closed.

Finally i have found the Cinema i remembered as an 8yr old, as my mum had taken me to see ‘South Pacific’. I was sure this Cinema was in Twin St nearer to Cox Foys & entered from old Rundle St as it was back then……perhaps someone may be able to remember if was entered from Rundle St or was it Grenfell st…i thought is was on the right side of the Lane when entering…. The City had many wonderful Cinemas…like Churches & Hotels [Pubs]!