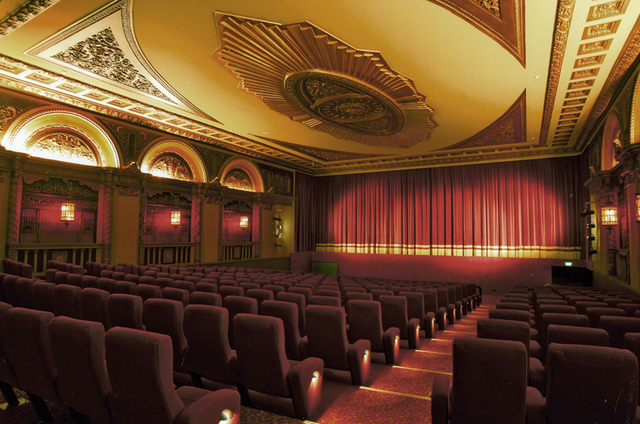 The newest addition to the Hoyts Theatres chain was the Brisbane Regent Theatre, which opened on 8th November 1929 with “Fox Movietone Follies of 1929”. The programme included ‘georgeous’ stage spectacles and music from classical to jazz was provided by the Regent Grand Concert Orchestra, with Stanley Wallace at the Wurlitzer 3Manual/15Ranks organ. It was designed for both films and live productions which followed the trend for similar buildings of that era. It was the first of the lavish American-styled picture palaces to be built in Queensland. It was an exhuberant mixture of Gothic and Empire period styles. The narrow black marble entrance hall with decorated barrel-vaulted ceiling and friezes was only a prelude to the stunning Gothic style foyer reminiscent of a medieval chapel where the arched ceiling murals were richly depicted in 13th century scenes. The immense white Queensland marble staircase which led to the mezzanine foyer was impressive. The workmanship was sumptuous.

Highlights in the auditorium were an elliptical dome in the main ceiling, chandelier, ornate proscenium arch, stage curtains, boxes, candelabra and orchestra pit which held 25 musicians. The Wurlitzer organ was removed from the building in November 1963 and was sold to a private residence in Lawson, N.S.W. Until 1978 when renovations were made, the original auditorium existed which had a capacity for 2,583 with 1,400 in the stalls and 1,183 in the balcony. The final performance in the original auditorium was on 29th July 1978 with a capacity audience attending a preview screening of “Thank God It’s Friday” plus selected film clips from 1929-1978.

Despite a ‘Save the Regent Campaign’, sadly, the magnificent auditorium was stripped of its fixtures and fittings in December 1978. In May 1979 work began on the internal demolition of the auditorium back to its brick walls. A four-screen cinema complex with 1,978 seats was built, of which Cinema One was decorated similarly to the earlier theme. The original 1929-era front of house and main foyers in their Gothic style were retained as an entrance to the plain cinemas.

In February 2008, plans were put forward to close the Regent Theatre, retaining the heritage listed facade and main foyers which would become an entrance to a new office tower block, to be built on the site of the auditoriums.

Greater Union Event Theatres closed the Regent Theatre on 5th June 2010 with “Titanic”, “Casablanca” and “Sex in the City” and “Lord of the Rings” being the final films screened. In November 2011, scaffold was erected on the front entrance to the building, in preparation for its demolition/conversion into the new office tower entrance. Demolition of the auditorium was completed in May 2012. The site of the auditorium remains an empty ‘hole in the ground’ in 2015. The main foyer and outer foyer have been converted into a tourist information centre.

Almost but not quite…

Just for the record – other comments on the net are correct. Titanic actually was the final film to stop rolling, due to its longer running time and its late start of 30mins. [Don’t know how that happened:) ] Audiences for Casablanca and Sex and the City actually had exited the building whilst Titanic completed its final voyage at The Regent.

I agree with the above comment – the Brisbane REGENT was wrecked when the auditorium was destroyed, the finest in Australia and the equal to the best in the U.S.A. apart from just a few very special places, e.g. Capitol/New York, Fox/San Francisco.
Thankfully the Sydney State and Capitol and Melbourne Regent remain basically intact but Brisbane has never respected its past, hence most of it is now gone.

On Wednesday June 29 2011 a public notice appeared in the Brisbane “Courier Mail” newspaper indicating that work on the demolition of the Regent Theatre cinema box (containing the currently closed 4 cinemas) is about to commence. A 37-story office tower will replace the theatre with the Regent’s entrance lobby and Gothic foyer forming its entrance off Queen Street.

At loss is the unique Showcase Cinema and its inner bar and vestibule with its 1929 reused plaster décor. Attempts to have these areas heritage listed failed and it appears that it will be torn down with only a fragment or two saved for an “interpretive display” in the new development. Also being demolished is the magnificent red brick 1929 Regent Façade on Elizabeth Street – part of the streetscape for over 82 years.

This is a sad day for the many thousands of Regent Theatre supporters who rallied behind the Save the Regent campaign group since 2008 to try to keep the cinema complex operating or even renewed as a live theatre. For more on the tragic loss go to www.savetheregent.com

It pains me to do this, but I’m changing this theater to demolished…

A new book on the Regent Theatre, Brisbane has just been published. Due out mid-October 2014, it covers everything from the 1927 conception up to the demolition in 2012. More details at:

In reading about this beautiful theatre, I got the idea hat the auditorium was torn down but the entrance and lobby was saved to be used for a new office building. I just googled the address and I see only a vacant lot with a fence. The lot is big enough to have had a theatre. No sign of the theatre entrance. sad.

Some was saved as per article about the tourist center moving into it http://www.brisbanetimes.com.au/queensland/restored-regent-theatre-reopened-as-tourist-hub-20141111-11kfsi.html

Such a sad but regrettably all too familiar story. Here in Perth, on the other side of the Australian continent, we have lost all of our ‘picture palaces’, including the mighty Ambassadors and the fabulous Capitol. I only visited Brisbane’s Regent once – in the late 1960s – and I remember it fondly.

The Brisbane Regent was possibly the finest Movie Palace in the Southern Hemisphere. There is no question that you would go to this beautiful theatre as much to see the place as to see whatever movie was playing. Brisbane was lucky to have been chosen to host Hoyts finest theatre and it’s a disgrace that the city couldn’t find a way to save it.