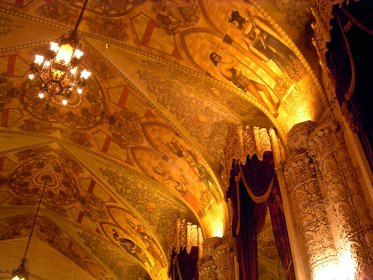 Does anyone know if the murals in the Melbourne and Brisbane Regents in Australia were made by Anthony Heinsbergen or staff from his company? Both theatres were opened in 1929 and have near-identical murals in their foyers, styled on the UA Theatre on Los Angeles.

Any leads as to the artists who made these murals would be most appreciated.

The painted murals in the Regent Theatre, Melbourne are locted in The Royal Promenade. They were by Quentin Sutton, a 23 year old, who had studied at Melbourne’s Swinburne Technical College and at the National Gallery Art School. The Murals are named ‘The Fruits of Glory’ and ‘Barter with the East’. These were destroyed in the 1945 fire and were replaced in the rebuild by murals by George Browning, depicting scenes from Lawrence Olivier’s 1944 film “Henry v

Murals in the original auditorium (later destroyed by fire) were by Portia East, a highly regarded artist who had exhibited in London & Paris, and was a lifelong and assiduous fighter for women’s rights. These were re-placed by murals by artist Charles Bush.

Details from the book: The Regent Theatre: Melbourne’s Palace of Dreams by Frank Van Straten (1996)

Ken,
You are correct with your comments on the murals in the Melbourne Regent, but these are not the ones I refer to.
They are on the vaulted ceilings between the clustered piers and tracery clad balconies of the foyer. Almost identical ones are in the Brisbane Regent.