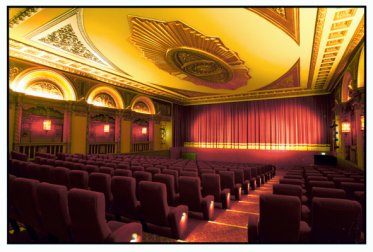 BRISBANE, QUEENSLAND, AUSTRALIA — Brisbane’s iconic picture palace, the Regent, is one step closer to being gutted and redeveloped into an office tower and lobby. The Brisbane City Council development planning unit rubber stamped the development in a hasty meeting on May 12. Opposition requests to properly re-examine the plans were quashed by a majority vote. A bland token cinema of 300 seats and two 60-seat “auditoria/meeting rooms” is planned, as well as a huge car park in what was the original cinema box. These “cinemas” will only open on weekends and questions of viability and the lifespan of these areas remain.

But the unique 1929 plaster ceilings and decorations in the current Showcase Cinema and adjoining bar area will be demolished, as the developers feel that this is not of any significance. The heritage listed gothic foyer and entrance lobby are protected by legislation, so the developers thankfully cannot touch those.

The showcase and bar areas are all that remain of the grand auditorium of 2500 seats and give it a continuing aesthetic quality carried over with the 1980 conversion to a cineplex of 4 smaller cinemas. It is the favoured home of the Brisbane International Film Festival and they will now have to look elsewhere.

A preservation group, Save the Regent, is lobbying stakeholders to at least save and keep the Showcase Cinemas for future use as it is culturally and architecturally significant. Help is needed with this. See Save the Regent for more details.

Here is the latest from local media:

“Brisbane City Council says its hands are tied over revamped plans for the historic Regent Theatre after the State Government did a "deal” with developer Brookfield Multiplex to increase the density of a planned office tower and shut down the cinemas on weekdays.

An original plan to preserve four cinemas with a 1461 seating capacity below a 38-storey office tower at the Queen Street Mall complex has been revised to 40-storeys and three smaller cinemas with a total of 420 seats after former Planning Minister Paul Lucas called in the development in February last year.

The new plans, revealed by the State Government in September, are due to come before Brisbane City Council for approval today.

However, the council’s Neighbourhood Planning and Development Committee chair, Councillor Amanda Cooper, said the council was obliged to follow strict guidelines set out by the minister, including a weekday ban on screening films.

“Two of these downsized cinemas will have just 60 seats and one cinema 300 seats. The cinemas will only show films from Friday night to Sunday night each weekend.”

Built in the1920s, the Regent Theatre was added to the Queensland Heritage register in 1992.

Plans to demolish it in the 1970 were met with public outrage and a petition containing more than 30,000 signatures was collected.

Mr Lucas last year described it as “the last remaining example of a Hollywood picture palace in the Brisbane central business district'‘, although its popularity with cinema-goers has waned in recent years.

New Planning Minister Stirling Hinchliffe said yesterday it was accepted the Regent’s days as a working cinema were over, and Premier Anna Bligh said it was “not the job of government” to prop up poor patronage.

The government has denied it had secretly revised plans for the site.

“The arrangements for the redevelopment of the Regent cinema were announced last year, and they haven’t changed,” Ms Bligh said.

“They’re exactly the same as we announced when we came up with what I think is a very good compromise; that is, the Regent Cinema will become a home, a hub for film and film-related activity, including a cinema that will operate on weekends and public holidays.

“Unfortunately you can’t make a cinema there viable commercially on a full-time basis and it’s not the job of government to subsidise the running of picture theatres.”

The proposal is likely to prompt fireworks at City Hall later today, with Lord Mayor Campbell Newman’s LNP team expected to pressure the Labor Opposition and former planning chair Councillor David Hinchliffe to “use his influence” to minimise construction impact.

The new complex will be home to the Pacific Film and Television Corporation, the Brisbane International Film Festival and the Asia Pacific Screen Awards.

The cost of the development is estimated at $800 million."

(Thanks to Mike for the pic of the Showcase Cinema)

It is, Twistr54. What a terrible thing that it’s being demolished. What were/are people THINKING when they knock(ed) down these beautiful movie palaces to make parking lots, arcades, pharmacies, etc.? Beats me!

I agree. What a gorgeous theatre. It’s a shame to lose it.

Save the theatre, please.

What a beautiful theater! To demolish it should be a crime. I’m convinced very few people have an appreciation anymore for theaters such as this. Tear it down and build a parking lot/office building. Most of the movie going public today has never experienced a film in a venue such as this. Give them bland, indistinguishable multiplexes and they’re happy. Very sad.

To be clear, this WAS a former movie palace until 1978 when it was irreversably modified into 4 cinemas. The auditorium worth saving has been gone for over 30 years. The lobby and foyer are the only remaining areas with any historical authenticity and they are keeping that anyway. The showcase cinema whilst nice, is just a 1980’s cinema with some plasterwork cut and pasted in, a sad reminder of what was at the time, considered a good compromise.