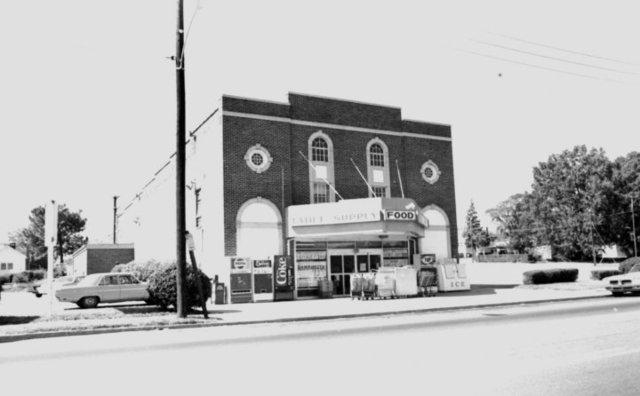 This was a theater during the 1940’s and 1950’s in Kannapolis. It became a grocery store for many years and was still recognizable as a theater. It was located on South Main Street in Kannapolis, just south of the Loop Road Southern underpass.

I uploaded a photo of the Dixie to my website since we still can’t do it here. Enjoy. View link

Sorry, my website got wiped out. I will upload another photo when I get the chance.

Here’s a link to the building they tore down, and is still a vacant lot after a year. Go progress!

If First Charter builds … I hope that they put a painting or photo of the Dixie on display. It would be so appreciated.

I thank everyone for the photos shared here.

Looks like status should be closed/demolished. The Dixie closed as a theater on May 31, 1957.
http://tinyurl.com/5jax4e

The December 17, 1938, issue of Boxoffice Magazine said that the new Dixie Theatre in Kannapolis was nearing completion and would be opened in January.

Additionally, from Boxoffice Magazine, February 5, 1938: At Kannapolis, N.C., the Cannon towel interests are erecting a new theatre to replace the YMCA structure, destroyed by fire recently, and in addition are opening a new house for colored trade. These ventures will give Kannapolis four houses, three maintained by the Cannon interests, the fourth, the Colonial, on the outskirts of town, is a pretentious house offering competition from Morris Legendre and associates…."

The Dixie was supposed to open by May, 1938, but a later issue of Boxoffice reveals that a shortage of materials delayed its completion.

Could the “house for colored trade” mentioned in the article have been the Palace?

Here is the Dixie when it was open

Ken, I am so grateful for the Dixie photo. Thank you. This is a wonderful way to share information and encourage memories.