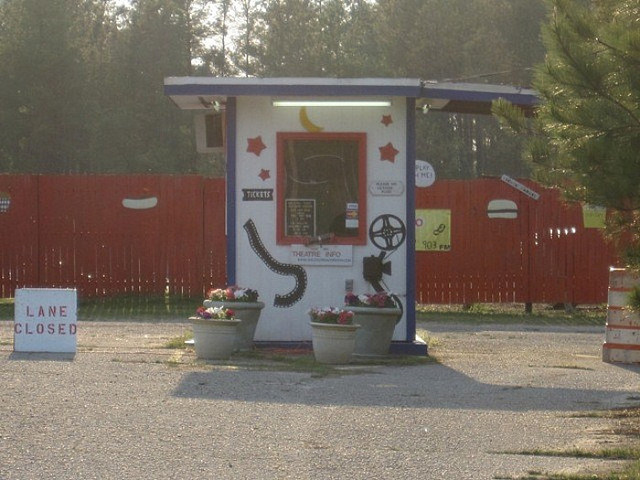 Nice photo of the screen painted to look like film.

Would love to have that poster frame if they aren’t going to put a one sheet in it.Nice Drive-in one of the top five in looks in the South.

In 1956 it parked 360 cars and was owned by S.S.Stevenson. In his book “STROKE OF FORTUNE” about the Carolina Theatre Business,author William C.Cline writes about this Drive-in.“the operator at the time was a man called N.T."Tinker"Lyles and he was never happy with the booking.nothing ever came close to being right.You just could not please the man.”

I am working on a research project for school on Drive-In Theaters in NC! Any information that anyone could supply would be greaty appreciated! Thanks!

This drive-in is now fully digital.

This is the closest Drive-In Theater to us it was over 2 hour drive but now I am 36 miles closer so now about an hour and a half.

The 1952-53 Motion Picture Almanac matched the Catalogs' owner and capacity. S.S. Stevenson and 360 stayed through the 1976 edition. The 1978 edition called it the Moonglow, capacity 300, still owned by S. Stevenson.

The MPA registered the name change to the Raleigh Road Outdoor in its 1980-88 editions, owner N. T. Lyles.

Southern Spaces wrote “In 1977, original owner Sonny Stevenson sold the Moon-Glo to the Lyle family, who renamed the theater after its location.”

The Washington Post wrote that Jim and Megan Kopp leased the Raleigh Road in 2006. But Viral Memories and everyone else said they bought it on eBay for $22,000 in 2006.

There’s a short documentary about the Raleigh Road from 2008, featuring Kopp, on YouTube.

The Fay Observer wrote that Mark and Jennifer Frank “bought the place in December 2011. Previously, they owned and operated a drive-in movie theater in Keysville, Virginia, but they sold it to focus on the old facility on the outskirts of Henderson in Vance County.”