At one time the busiest theatre south of Washington DC, this twin ran the same film with staggered showtimes for most of it’s lifespan. The Loew’s 167th Street Theatre was opened on June 18, 1969 with Richard Benjamin in “Goodbye Columbus” screening in both auditoriums. In the mid-1970’s, it ran “Love Story”, “The Godfather”, “Paper Moon”, “The Last Picture Show”, “The Way We Were”, and “The Godfather Part II” and never seemed to be aware there was a product shortage. The main screen had over 700 seats making the second screen tiny by 1960’s standards, hence the booking policy.

This and the Bay Harbor had a co-owner hence they never became part of the General Cinema sale.

Actually in the film MAKING MR. RIGHT from 1987. They filmed inside the mall and you’re also able to see the front of the actual 163rd STREET theater from inside the garage looking out at the beginning of the mall scenes. The marquee reads THE PARENT TRAP.

While it may not be the greatest look at the mall, I think it may be the only cinematic document of how it existed circa the late 80’s other than local news.

This is a different theater then the one in the movie. You’re thinking of the mall theater. This is the one that used to be across the street from Nathans(?) down the street. In the 80s it had a Coconuts Record store adacent to it in a mini-mall…

So this theatre opened as a LOEWS.

Was there anything particularly unique about the design of this theater? I have only one memory of seeing anything there — “The Black Hole” in January 1980 (confirmed in the Miami News ads) — and in my mind’s eye there was something appealing about the interior…don’t ask me what…maybe nothing more than nice curtains or a particular color scheme.

I seem to recall a really modern sleek design with curtain wall coverings all around that made the screen area almost disappear when the curtains were closed.

The seats and leg room were nothing special and paled next to the high back ‘rocking chairs’ and leg space at the Bay Harbor and Sunny Isles.

The June 18th, 1969 grand opening ad has been uploaded here. I added the colours* after.

I take it those were the interiors; i.e., the curtains? Because I suspect the curtained wall coverings — especially if blue/green in theater #2 — might be what I’d remembered.

I saw “Star Trek The Motion Picture” (the really awful one that was 50% sweeping wide pans of the miniature Enterprise … gack that film BLEW) in this massive theatre when it was the Loew’s back in 1979. It was on par with the large screen at the mall theatre (NE 12th Avenue), but it was a lot newer and was superior as a facility. Yeah, the curtain opened and closed, but a lot of them still did that back in the day. I have to go to London to find a giant screen with proper exhibitor habits these days. 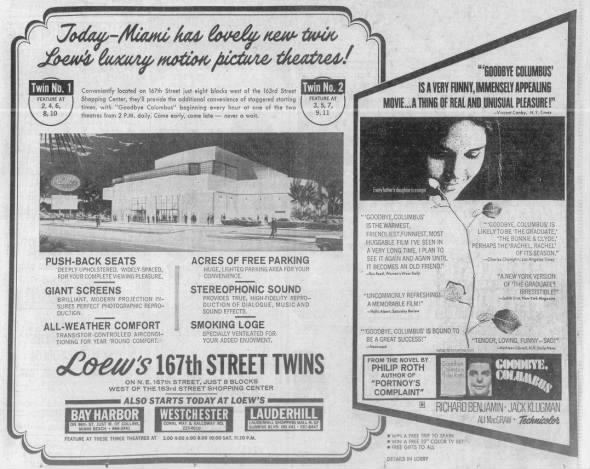