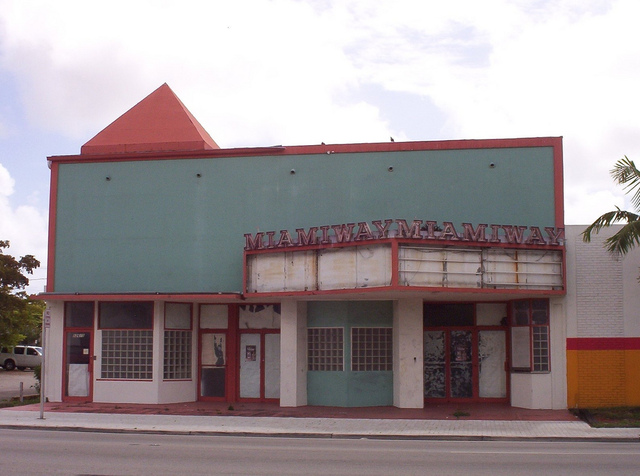 A self standing theatre, this location may have started out as a playhouse since it’s awkwardly uncentered projection booth seemed like an afterthought. The North Miami Theatre began screening movies on May 5, 1949 with John Wayne in “3 Godfathers” and is listed as open in the 1950 edition of Film Daily Yearbook.

A discount house in it’s latter days, the North Miami Theatre had an extended run of “I Am Curious (Yellow)” in the late-1960’s which was still a hit even though the Miami Herald refused to accept the advertisements. On November 6, 1970 it was renamed Southland Cinema.

Even though the sign says “Miami Way” and now it’s referred to as the"North Miami,“ this theater will always be the "Southland” Theater to me as it was for so long during my youth. I was 6 years old in 1958 and attended often, probably from then to 1968. The best memories of it were after Actor Phillip Michael Thomas took it over while “Miami Vice” was shooting in the early 80’s. Mr. Thomas has a big heart and helped a lot of fellow thespians to pursue their dreams on the stage with this facility.

the theater pictured is located at 12615 Dixe Highway, Sixth ave is a good block away. I remeber seeing the last picture show here in 1972. I would like to know the correct name of the theater at that time if anyone knows.

Thanks for that answer, Next question can we get the address corected? with the error in address it makes it look like there is another theater a block away.

I remember going to this theater with my cousin and sister to watch Saturday Night Fever and Grease.

Does Anybody know the date it was constructed?

It started showing movies in May 1949 and was operated by E. Bramscombe, who owned the Coral Way Auto Drive-In. The opening night was sponsored by the Optimists Club. Was it a live theatre before then? The awkward location of the projection booth suggests that it was.

Relaunch shown here on February 21, 1963 as the North Miami Theatre to the plans by E. Abraben & Associates firm with “A Girl Named Tamiko.