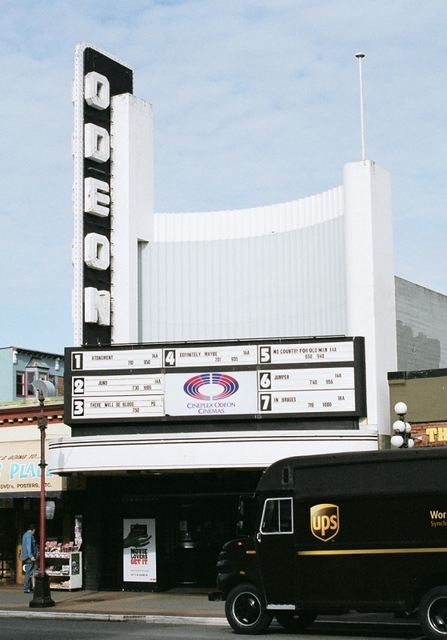 Theaters #4 and #6 now feature Real D 3D projection capabilities, although for the most part 2D features are booked into these screens. The 35mm equipment has been removed.

Cinema #5, the largest auditorium (and former balcony of the original cinema) had Real 3D capabilities for about a year, but is now back to 35mm only. I have been told this may change soon as the entire complex may go digital next year, and #5 will be the first to be converted back.

Rumors abound that Cineplex will switch this theater entirely over to digital projection in the summer or early fall. I’m just hoping they enlarge the smaller auds (#1 and #2, still to this day the former orchestra of the original huge auditorium) somehow.

“I never saw a film in the theater’s original glory, having grown up in the 80’s and therefore having no choice but to see films in the triplexed theater (although if memory serves, I’ve been told that the theater was duplexed in the 70’s before the downstairs cinema was divided). The upstairs theater was still a fine place to see film, with Dolby SR and a large common height wide-screen. Sadly, the downstairs cinemas were a victim of the time and were given smaller top-masking screens and mono sound (although there were surround speakers there, which never were used).”

With all due respect, your memory or whomever gave you the info, is way off. As I mention in my Jul. 6, 2009 comment, I worked there when most of the theatre was still in it’s original state. I had seen just about every square inch of the place, including the unusual cement air ventilation system (in the basement) that you could walk in. The place originally opened as a single theatre with a stage and a balcony, which were still there when I was employed there (early eighties). In the 1970’s, the theatre was converted into two (not three) theatres by erecting a soundproof wall down the middle of it, that included the balcony. They also added ceiling to floor burgundy curtains to cover the walls. Everything else as far as the lobby, candy bar, mezzanine, washrooms, box office stayed the same. In the fall of 1980 (when I was there), they converted the two theatres into three. They closed in the balcony, added a screen, took out the wall and made it into theatre 1. They built two new projection booths downstairs and installed two state of the art projectors (with dolby surround sound) in each of the three theatres, including new surround speakers. Each booth had an IATSE projectionist. We (the staff) were also union. They also re-did the lobby, moved the candy bar across the lobby and made it much bigger and built a new candy bar in the mezzanine outside theatre 1. They put in a new marquee upstairs (outside) to accommodate the three theatres show times (I was out there many times changing the info on thursday nights) as well as in the box office area for one sheets, something I also changed many times. I also remember helping put in new seats in theatre 1 just when E.T. came out. That, by far, had to be one of the weirdest and busiest summers ever. Every single show for that movie sold out for the entire summer. I also remember having to announce that and disappointing kids who would start to bawl. I was such a meany!

Back in the eighties, there were a number of movie theatres around Victoria. There was the old Capitol which was torn down for the Capitol 6, The Royal was a movie theatre, there was the Haida theatre across from the Capitol, Coronet further down the street. Counting House Cinemas (two theatres) and the Landmark theatre down by the Empress. Oh, and the Oak Bay theatre too.

As far as grand old theatres, the old Capitol and the Royal were the only two that would fit that bill. The smallest was probably the Counting House Cinemas.

Canadian Odeon owned the Counting House, Haida and Odeon theatres. Famous Players owned the Capitol, Royal, Coronet and Oak Bay. Landmark was the only private theatre and it showed first run shows too. I remember seeing Blade Runner there with a friend and three other people in the entire theatre.

From what understand, all the theatres are gone now except the Odeon, Capitol and the new Silver City, which I’ve never been to.

Just an FYI, I also spent a few years at the Capitol 6. Six years total between the two theatres. Good times and good memories too! It was also a time when ushers showed customers to their seats using flashlights. Unlike today.

I had a talk with good ‘ol GM Pierre at the Odeon recently, showed him this post and he confirmed everything you said. My previous source was a younger GM who told me of the incorrect split…so my apologies on that! And big thanks for all of your memories of working there; that’s really amazing stuff! As I’m also a lot younger, I only have faint memories of the Counting House and the Haida, but I loved those cinemas. The Haida had a small balcony that I loved to “sneak up” into sometimes.

(I’d also like to add to your post that Cineplex Odeon had the Towne until the early 90’s, then Landmark re-opened it as The Vic in ‘95)

As is now, I’m still trying to figure out how the heck they had two screens from the original screen. That twinning must have been a disaster resulting in two narrow, “bowling alley” type theatres. Currently #5 (formerly #1) is known as “The Big House” and people still love it.

On another note, the Odeon is now all digital projection. All of the film equipment has been removed, save for the Century/Prevost in #5 (although I haven’t been in the booth to see if the rest of it is still intact).

Capitol 6 across the street is now 100% digital and all film equipment has been removed.

Entire complex to switch to leather reclining seating (with the reopening Capitol also opening Nov. 4th/2016 with new leather reserved seating) starting now and to be completed by the end of 2016. 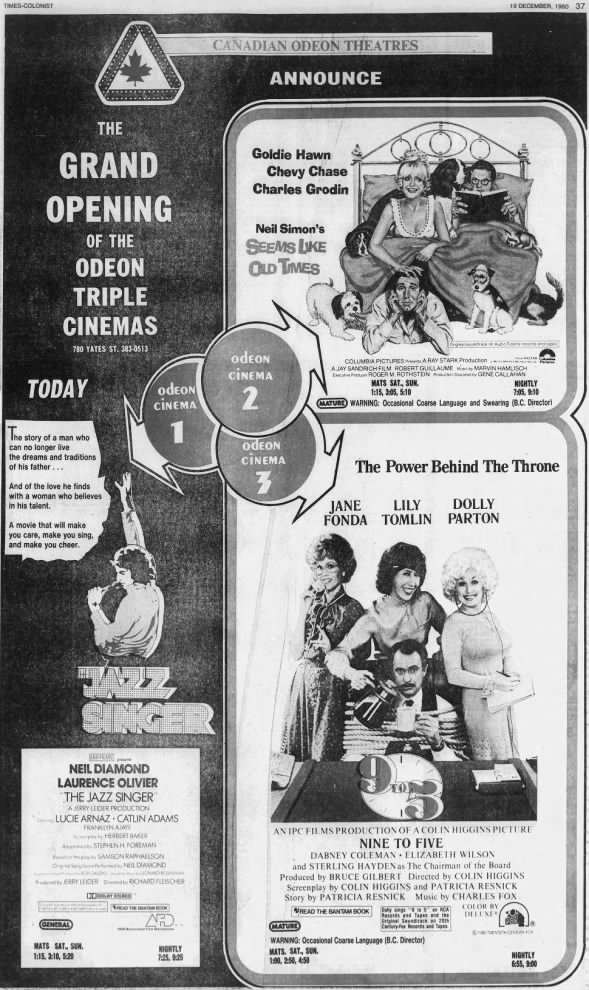 This cinema’s opening film was “Master of Bankdam.” When it was twinned on December 24, 1970, its opening films were “The Private Life of Sherlock Holmes” and “The Owl and the Pussycat.” Then, when it became a triplex on December 19, 1980, its opening films were “Seems Like Old Times,” “The Jazz Singer” and “Nine to Five.” On March 7, 1997, it became a seven-screen multiplex, with its opening films including Donnie Brasco, Fools Rush in, Absolute Power, Dante’s Peak, Ridicule, Sling Blade, and Lost Highway. Even with an update to recliners, I’m not sure why Cineplex wants to keep this cinema despite competition with the nearby Capitol 6.