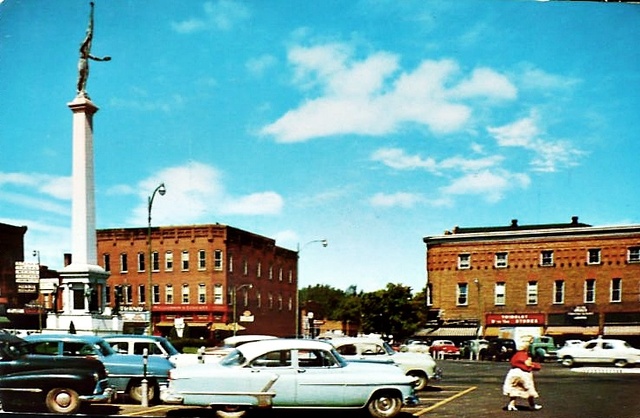 I had this theatre for a very short while. Just long enough to lose my butt! I remember having to “swing” myself into the projection room and then pull the film up by rope!

Two theatres that close,and in a small town at that.

That is a great photo.

Did this close in 2011? No showtimes for this cinema.

This theatre does not bother to tell anyone online about its showings.

Anitem in the April 17, 1931, issue of the Angola Herald said that Mrs. Gladys Brokaw had leased the former Browkaw Theatre on the north side of the square to a Mr. Ellis, who was in the process of building a new theater on Maumee Street next door tot he Hendry Hotel (the Hendry, which burned in 1968, was at the southwest corner of Maumee and Elizabeth Street, one block west of the square.) Ellis intended to use the theater on the square as an overflow house.

Another brief item in the Herald on July 3 said that the former Brokaw Theatre would reopen as the Strand Theatre. The New Brokaw Theatre was still under construction, as was Mr. Eliss’s new house, for which the name Angola Theatre had been chosen. As it turned out, the Angola Theatre never opened. The uncompleted theater building was foreclosed in 1932.

Joe Brokaw was not without a theater during the period between the closing of the old Brokaw Theatre and the opening of the new one, though. Numerous items in the Herald during the period indicate that the Angola Opera House was presenting talking pictures, and that Joe Brokaw was the manager. In fact Brokaw had been operating the Opera House at least as early as 1926, and a DeForest Phonofilm sound system had been installed in October, 1929. The first sound movie presented in Angola was the Marx Brothers first feature film, “The Cocoanuts”.

Joe Brokaw had been in the theater business at Angola at least as early as 1909, when the Steuben Republican was touting the “New Brokaw Theatre” in its issue of December 9. The May 26, 1914, issue of the Herald mentioned “Brokaw’s new theatre”— presumably the house that eventually became the Strand.