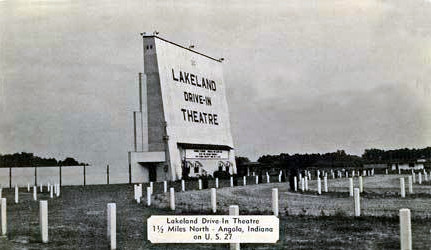 An Walmart now stands on its site. I uploaded an USGS Aerial in the photo section for this drive-in.

Walmart is at Northcrest. Lakeland was further south and closer to the highway.

There is a video here showing its demolition in 1987. A small K Mart was then built on the site. (K Mart built a number of these, including one in nearby Coldwater, MI, which proved to be unsuccessful). It was replaced later with other stores. There are some other photos on its gallery page at Drive-ins.com.

The Lakeland Drive-In opened for business September 16, 1949 operated by Clair Stuckey and M.H. Scheidler. Capacity was reported at 840 cars with a 60' by 60' screen and Simplex projection.

Torn down summer of 1987. Replaced with a k mart and a strip mall. The k mart only lasted a few years and closed up.