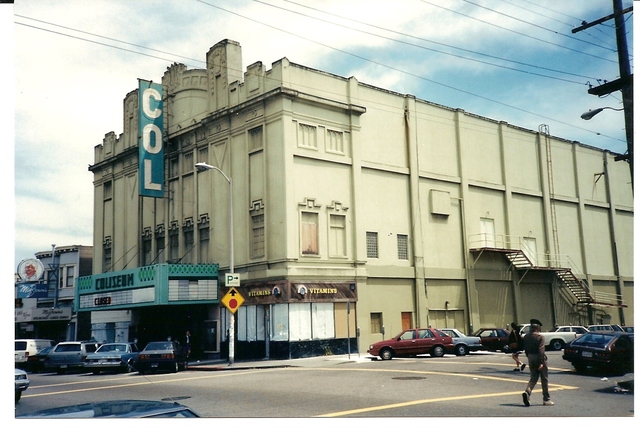 Located at Clement Street and 9th Avenue. The Coliseum Theatre opened November 22, 1918 and its film was “Johanna Enlists” starring Mary Pickford. It was equipped with a Robert-Morton organ. Originally designed in a Greek Revival style by the Reid Brothers, it was renovated numerous times with an Art Deco style in the 1931 to the plans of architect S. Charles Lee. It was badly damaged by an early morning fire on July 2, 1935. It recieved some rather tacky modernism in the 1950’s.

The Coliseum Theatre hung on until October 17, 1989, when it was closed. In 2000, the theatre was gutted, ending any hope for a comeback for the former movie palace.

Here is another photo from Bryan Krefft’s aforementioned link:

I grew up on the Presidio,( 1976-81 ) and used to sneak through a hole in the fence that put you on 15th ave. and Lake, rather than go all the way around to the Lincoln/25th ave. entrance. Through the summers of 1976-‘77 my buddies and I saw many films at the Coliseum, the Coronet, and the Alexandria. The Alexandria was a particular favorite place because of the Atari Gand prix game in the lobby. I remember seeing the Sorcerer, A bridge to far, a double feature of both the Godfather and the GodfatherII !, and more that I can’t recall at the moment. The last film I saw there was The adventures of Yellow dog in 1994. A few years ago I was walking in the richmond, and was devastated to see the coliseum just after they finished a phase, the building was gutted, no insides, no roof just the outside walls, I just stopped and stared, just seeing it like that …and just like now as I’m typing this,it made me cry. It made me remember not only the films I saw there, but also the buddies and girlfriends I went there with. Remember the line in the classic film Vertigo that the tycoon said to James Stewart’s character “ The things that mean San Francisco to me are quickly disappearing ” I guess this happens to all of us who live long enough.

Oh yeah, the last film that I saw at the coliseum, was Predator in 1987; a lunch and a movie date.

The Coliseum Theater at Ninth Avenue and Clement Street, one of San Francisco’s largest neighborhood theaters, was swept by a major fire causing undetermined damage early today. An unidentified motorist at 2:30 a.m. notified a special policeman two blocks from the playhouse that he had seen smoke issuing from the building as he drove past it. An alarm summoned firemen, who broke down the heavy doors of the main entrance. This action, they said, resulted in a draft which caused the entire balcony section of the theater to burst into flames. A second alarm brought additional men and apparatus to the scene and a stubborn battle against the flames began. Five hours later the battle was still in progress.

Reports from the scene said the whole balcony section of the theater had been destroyed and the main floor seriously damaged by smoke and water. Valuable projection and sound equipment also was lost, the report said. The origin of the fire had not been determined, but fire department officials expressed belief that it was caused by a carelessly discarded cigaret in the balcony section, where smoking was permitted. The theater is owned by the San Francisco Theater Corporation, with offices at Taylor Street.

I went to see The Blues Brothers here so many MANY times!

It was turned into a Walgreen’s with expensive living space above (a 2 bd, 1200 sf, apt sold for $800,000 last year). Sad but at least the building wasn’t ripped down like so many others. Just turned into housing that no one can afford.

Launched November 22, 1918 just after WWI with Mayor James Rolph commending new owner Samuel H. Levin and his 700 patrons for the fine playhouse. A Robert Morgan organ entertained the crowds once inside followed by the Coliseum Orchestra.

Sad to hear that the building has been converted into Walgreens today.