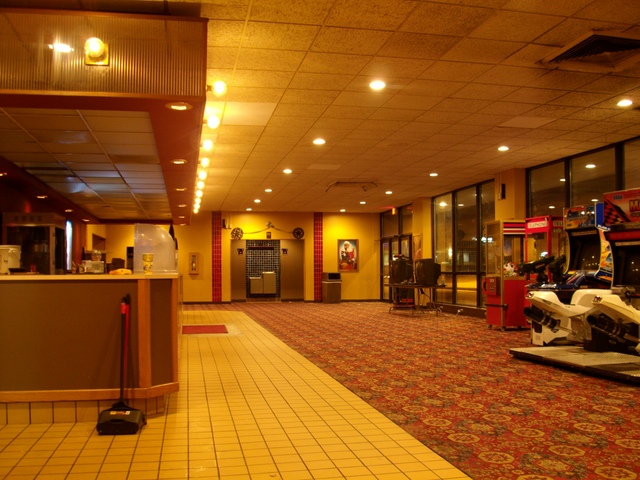 The Crown 4 opened on December 23, 1983. On August 9, 1991 it was expanded to 8-screens. It was operated by Wallace Theatres under the Hollywood banner.

It was taken over by the independent Screenland chain, and was closed April 1, 2014. It was demolished in 2015.

Plaza 4 opened as a Crown Cinema theater Christmas 1983 then expanded to Plaza 8 in August of 1991. Crown Cinema was purchased by Hollywood Theaters of Dallas, Texas which was then bought out by Wallace Theaters of Portland, Oregon which is now known as Hollywood Theaters. Plaza became a subrun in 2005 when the new 10-plex in town opened and is now run by the Screenland chain. It currently does not have all 8 auditoriums in operation.

This theater does NOT have stadium seating as stated in the overview.

This theater is at risk of closing in the spring of 2014. The current operators do not appear to be interested in purchasing the building from the owner nor does either party show interest in making the necessary upgrades to the building to keep it operating. The roof leaks, the HVAC systems are on their last legs, the bathrooms are decrepit, there are many many broken seats and torn curtains, poor sound, and the rest isn’t far behind. This theater is still operating with 35mm film and associated equipment, much of which was used when the building was built. All 8 auditoriums are currently ‘operating’. Such a shame, there has been a theater on this site since the ‘40s or '50s. This place could really shine up nice with a good overhaul…. It’s really a St. Joseph staple at this point. The only other theater in town currently is the Hollywood 10 at the far north end of town.

The land has sold and the building will likely be demolished by summer. End of an era….

Google still shows the building still standing, but the accuracy of Google mapping is questionable.

The building is indeed still standing. Has been vacant since April 1st, 2014. With a leaking roof over most of the auditoriums, and a large hole in the low spot of the lobby roof, the interior is in absolute deplorable condition with mold covering everything and crumbling ceilings. On top of the vandalism, the leasing party had a crew come in to strip all projection and sound equipment leaving the building a sad hollow shell of its former self. I hear from a moderately reputable source that Price Chopper plans to “break ground” this spring, 2015. How sad…

Opened(on different screens) with “D.C. Cab”, “The Smurfs and the magic flute” and “Terms of endearment”.