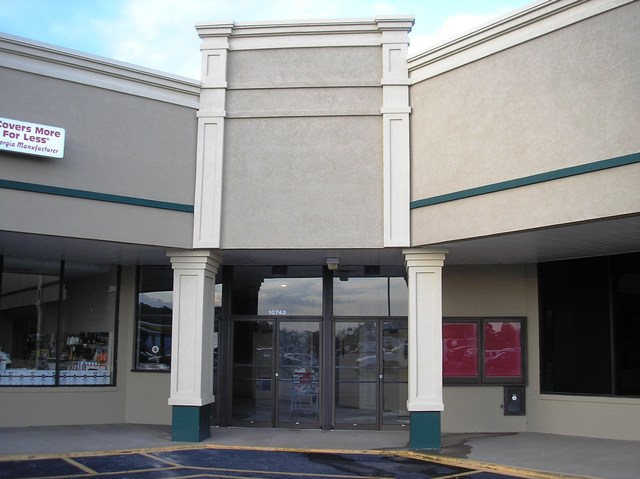 The theatre was sparse, designed for a staff of two, one to work the concessions and the other to man the ticket and projector booths. The lobby consisted of a concession stand that also served as a box office and a single set of restrooms.

The last time I patronized the Brannon Square Cinema was in the 1980’s. Although it was a second run venue at this time, it was very clean and the projection and sound were top notch for a cinema of this class. It was closed by Carmike Cinemas in 1998.

It was reopened in 2011 as the Navrang Theatres, screening East Indian films. In 2016 it was renamed Digimax Cinemas.

I’ve heard several stories about Brannon Square’s origins. The nearby Roswell Village was definately a Jerry Lewis at one point. Both came under Cineplex Odeon control with the buyouts of Plitt and Septum. Was operated for a short time by Carmike after they took over from Cineplex Odeon. A friend on mine’s father was with Carmike as a VP and showed me the financial info that Carmike got when they took over from Cineplex and the ONLY theater that Cineplex had left that was turning a profit was Brannon Square! As I understood it, Carmike took over the locations they did from Cineplex for a token amount with an understanding they would also take one of the Memorial Dr. theaters if Cineplex could make it turn a profit, that’s why the one Memorial Dr. theaters continued on under the Cineplex banner for a few more months.

Is anything left of this theatre?

I never attended either of these places, but do remember when both came into existance. I think that Raymond is right about the Roswell Village being the Jerry Lewis. If my memory is correct, not a sure thing these days, Septum took over the old JL at the same time as the Buford Hwy JL. They then built the Brannon Square later on. Or, it may have been vice versa, but I am pretty sure the Brannon appeared in the Septum ads after they were already established.

Here are photos from July 2007 of the former cinema. The stucco faÃ§ade was not part of the original design and added on sometime during the nineteen eighties:1, 2, 3, 4

This reopened in 2011 as Navrang Theatres http://www.navrangtheaters.com/nav_rang/show.do1

It shows movies from India.

I worked at this theater, and Roswell Village, from 83 to 85 for an @*% of a manager!!! Oh hello there Steve. Actually you were one of the best supervisors I’ve ever worked for. In the event you don’t remember the name my brother dated Carly Price, now married. We did have some good times at this theater, as you stated, when outstanding movies reigned.

This opened as the Septum Brannon Square 2 on December 15th, 1978. In 2016 it was renamed the Digimax cinemas, which continues to show Bollywood product. The official website is at http://www.digimaxtheatres.com/