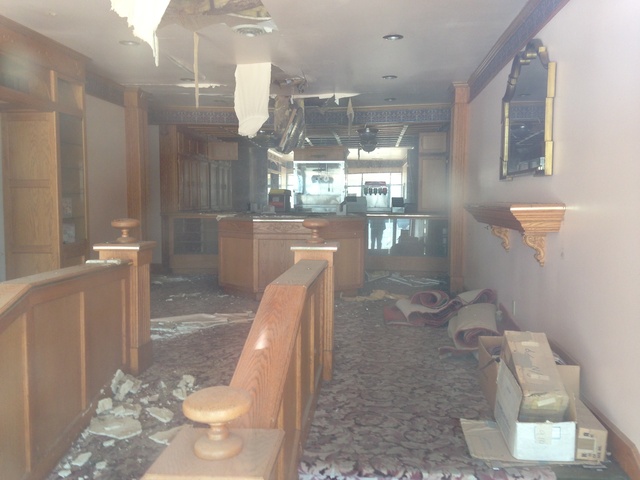 The Rialto Theatre is located in downtown Cozad at E. 8th Street and F Street. It opened in 1921. The theatre seats 350 and has a small balcony. Playing first run attractions, the Rialto Theatre operated on Friday, Saturday and Sunday. There was also a video store in the lobby of the theatre that was open daily.

The Rialto Theatre was closed in 2008. It was demolished in 2015 due to structural problems.

From 2010 in Cozad photos of the Rialto Theatre building Here and Here.

At site now. Posters, DVDs still in lobby but ceiling and fixtures are torn and plaster is everywhere.

There is still a “now showing” poster in the lobby for “Open Season” which implies a 2006 closure.

Remarkably, all the video boxes are still in the video store portion. This theatre seems to have been abandoned almost overnight.

The Rialto was demolished in 2015. The sad story is told in this article from the Omaha World-Herald of June 15 that year. There are photos. The theater had been closed in 2008 due to structural deterioration that had led to leakage and then a partial roof collapse.

An item in the August 28, 1920, issue of The American Contractor describes a theater project at Cozad which fits the description of the Rialto:

Victor F. Beck began his career as a brick mason, became a brick contractor around 1910 and began advertising himself as an architect in 1911, first in Omaha and then in North Platte. The brickwork of this theater was quite impressive, and looked to have been in good shape to the end. It’s too bad the roof didn’t hold up as well.