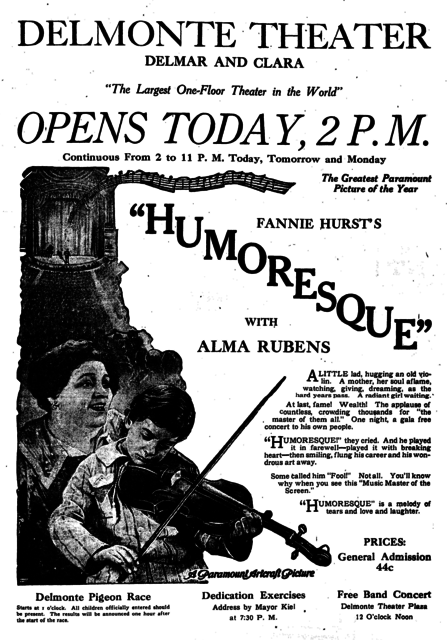 Architect of the Delmonte was E. Price Porter.

Claiming to be “The Largest One-Floor Theatre in the World” the Delmonte opened in September, 1920 with 2800 seats. Under the management of Famous Players-Missouri (Paramount) the opening film was “Humoresque”. In the audience opening night was Fannie Hurst, author of the book on which the film was based.

Perhaps the theatre’s one claim to fame was the appearance of Valentino on stage in 1923 with the theatre swamped by flappers
tieing up traffic on Delmar.

Paramount had dropped management late in 1921, and theatre had various operators before finally closing as a movie house in February 1927. After this, theatre was converted to a night club in 1929; then to a bowling alley in 1938.

Located at 5634 Delmar, seating capacity was reduced to 1588 by the time of closure. (Capacity once claimed to be 3700 in fact.) Theatre was behind a six-story apartment building. Theatre structure has been demolished, the apartment building remains.

Trade publication The Reel Journal carried an item about the Delmonte Theatre in its issue of January 16, 1926. It said that Jack Weil and Ray Miller had taken a long-term lease on the house, and would “…show feature pictures in conjunction with five acts of high-class vaudeville and orchestral specialties.” The lessor was named as Fred L. Cornwall, and the theater’s seating capacity was given as 2688.