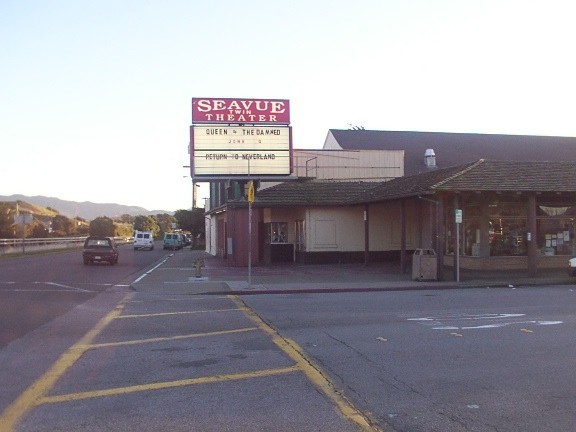 Located between San Francisco and Half Moon Bay. The Seavue Theater was a large single screen theatre built in the early-1950’s and opened on May 23, 1951 with Spencer Tracy in “Father’s Little Dividend” & Brian Donlevy in “Fighting Coast Guard”. It had amongst other details, retained its ladies' powder room, as well as a decorative tower that was once illuminated. The Seavue Theater was twinned later in its life and remained open despite competition from local multiplexes in San Francisco and on the Penninsula.

I was the assistant manager at the Seavue for a couple years in the early 90’s and I can say it was a great place to work. The locals were great people. I made not a few friends there. We used to love going out onto the little deck off of the projection booth near the sign. You could also access the roof from there and it was a great place to watch the sun go down over the Pacific. I used to curse Silver Screen for being so damn frugal, but looking back I’m amazed they were able to keep it open as long as they did. There were plenty of late shows with 2 or 3 people in the audience and some nights we just shut her down because no one came. We used to run a survey to see where our guest were from and some came from far down the coast to see our films. It was a Pacifica institution, but what can you do? Nothing lasts forever. Good bye Seavue…

Went there just once to see A View to a Kill. The Goonies was playing in the other theater, There were only 3 other people there besides us. The people that ran the place was really friendly. Inside the auditorium reminded me of a airplane hanger, the ceiling was all white and looked like either steel beams or wooden ones holding the roof up. It was really clean inside.

This was a part of my history too. I worked there in 1991-92 and it was a great little theatre. I remember one night I found a box of old trailers and I spliced all of them together to make a 2 hour print full of old trailers. Not many theatres around like that anymore where one could do something like that.

Went there in the 60’s and early 70’s. There wasn’t much for kids to do in Pacifica, so the SeaVue was usually packed. It was kind of run down and dirty then, but on Saturdays in the mid 60’s, you could see a western or a comedy and get stale popcorn and a drink…all for about $.50. One time, maybe about ‘67 or '68, they had a live band play there in the afternoon…Sopwith Camel it was called…big stuff for Pacifica.

My first love lived in Linda Mar and on our first date after returning home after the trip where we met, we went to the Seavue to see Franco Zeffirelli’s Romeo and Juliet in 1975. She was an incurable romantic and loved this screen version of Romeo and Juliet. Great memories, both of her and our first date. She was taken by breast cancer, but she, our first date, and this theater will live on in my memories until I see her again.

I live here again, having grown up here in Linda Mar. Pacific Manor is a district in the north end of Pacifica, not just a shopping area. The Seavue was in Pacific Manor. Period. It is now a Walgreens and in my opinion it’s a damn shame the city did not step in and save the movie palace of my childhood, where I saw all the great monster movies and Sci-Fi and comedy films in the ‘50’s.

Hi Sturgeon – The posting for this theatre originally stated it was located in Pacific Manor. The reason for my post above was that theaters on CT are listed by city, not neighborhoods. BTW, I live nearby also (in SF).

The interior of the theater looks very similar to the Granada in Morgan Hill.