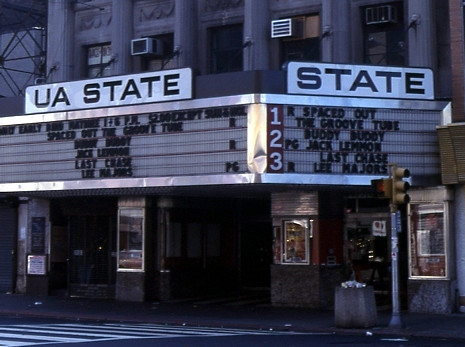 Located near Journal Square, the State Theatre opened on April 24, 1922 with Lilian Gish & Dorothy Gish in “Orphans of the Storm” plus vaudeville acts on the stage. It was designed by architect Percie A. Vivarttas with a classic Greek temple-inspired exterior and a refined Colonial or Adamesque interior. This was a large 2,169-seat theatre which had a very large mezzanine lounge. Against one wall of this lounge, the movie was projected by means of a mirror system from the projection booth.

There was also a hole in the center part of the floor of the lounge which looked out upon the orchestra audience below. This theatre had one of the largest Moeller organs ever installed in any theatre, its console had 4 manuals. The theatre also contained a music and dance school at one time.

In 1948, while under the ownership of Skouras Theatres, it was remodeled to the plans of architect Jules Catsiff. It became a 3-screen theatre on November 19, 1975. Later a fourth screen was added.

This was Jersey City’s first real movie palace and it closed in December 1990, and was sadly demolished in 1997.

The heading above should be changed to reflect the correct number of screens. It was a quad when it closed. Not sure of when it was divided.

I lived in Jersey City in 1977 for about a month and it was a quad then when I saw Pete’s Dragon there.

The State closed in December of 1990. The last movies to be shown were: Misery,Rocky V,The Rookie,Predator 2.

Does anyone know when the other big theatre, the Stanley closed? I remember back in the 70’s all 3 of them may have played double features.

Thank you. So that was the biggest of the 3 and the first one to close.

And it was never twined, triplexed or quaded by RKO Stanley Warner.

This opened on April 24th, 1922. Grand opening ad in the photo section.