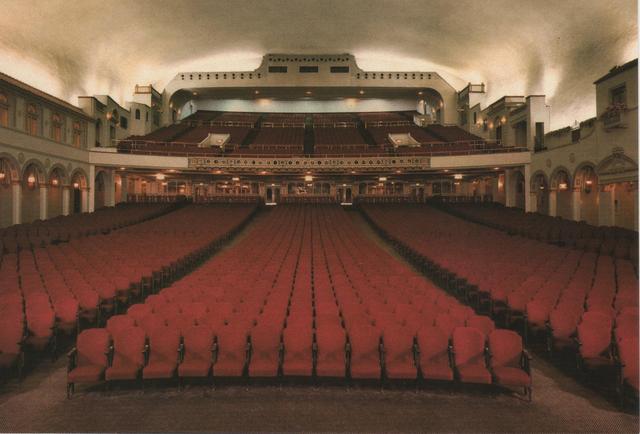 The auditorium is literally an acre of seats set in a Venice courtyard, with an 85-foot high Atmospheric style ‘sky’ ceiling and a proscenuim arch based on the Rialto Bridge in Venice, Italy. Marble for the columns came from Italy, Texas and Vermont. Ones eyes will feast on a wealth of ornate arches, columns, balusters, urns, terra cotta, decorative plasterwork, marble columns in green, orange and cream, topped with pediments tastefully decked out in gold leaf. The proscenium is an imposing white stone arch with a beautiful frieze in beige and white. Above is an enormous expanse of smooth plaster arching 85 feet over the auditorium providing the Atmospheric style ceiling, complete with twinkling stars and clouds slowly drifting across, courtesy of the Bronkfort Brenograph projector.

Most of the seats are in the orchestra, with the remainder in a relatively shallow balcony. This coupled with the relatively low ceiling gives a wide and open feel to the space, adding to the serene, outdoor setting in a most convincing way.

For some years, the Stanley Theatre had stage shows to accompany the film presentations, and many of the greatest stars of their day, from Tony Bennett to The Three Stooges made appearances. The Stanley-Fabian chain was acquired by Warner Brothers in late-1928, and the Stanley Theatre remained a Warner Bros. operated theatre until the anti-trust decree of the late-1940’s forced studios to divest themselves of their theatres. The chain was spun off as Stanley-Warner, later becoming acquired by RKO.

The Stanley Theatre continued as a premier movie venue for decades - even in the early-1960’s it was still a place to get ‘dressed up for’. The engagement of “Whatever Happened to Baby Jane?”, starring Bette Davis and Joan Crawford broke all attendance records. Through the 1960’s, the Stanley Theatre struggled (as did all movie palaces) with the rush to the suburbs and the growth of television. It became a fairly popular spot for major concerts (including the Grateful Dead, Janis Joplin, Tony Bennett etc.) but movie attendance dropped drastically, and the building became quite deteriorated, suffering from water damage, peeling plaster, ill-advised ‘refreshing’ (i.e. painting all the metal grillework glossy blue, selling the organ and most of the lobby furniture). It became dark and dingy, with the balcony and the front of the orchesta seats closed off. Finally, it could hold on no longer and was closed on April 20, 1978.

As mentioned above, the ‘Mighty’ Wurlitzer organ was sold off in the early-1970’s, and is currently very active entertaining school groups and concertgoers at the Van Andel City Museum in Grand Rapids, MI.

For several years, the fate of the Stanley Theatre looked quite grim - downtonwn had seriously declined as a shopping destination, there was no future seen for these beloved movie palaces (several prominent ones were torn down at that time, including the Metropolitan Theatre, Baltimore, the Alhambra Theatre, Cleveland, Keith’s Theatre, Washington and the Rialto Theatre, Chicago. For a time it looked as if the Stanley Theatre would meet the same fate.

However, in one of the most significant movie palace restorations ever, it was purchased by the Watchtower Bible and Tract society in 1983 to be restored as a regional Jehovah’s Witnesses Assembly Hall. The Witnesses then set about on a massive and sensitive restoration project, entirely undertaken by thousands of volunteers, to completely clean, repair and restore the building to its original appearance. Fortunately, despite the years of neglect, the Stanley Theatre was virtually intact, having never been multiplexed or converted into other uses.

Plaster was repaired and rebuilt to original appearance and colors, as were the chandeliers, marble columns, stained glass, railings and the Atmospheric style ceiling. The massive marquee was restored and polished to its original brilliant copper hue; so were the original ticket booths and heavy brass doors; the metal is polished on a regular basis. The courtyard setting of the auditorium is simply breathtaking, in its original colors; unlike many movie palaces which are bright and flashy, this space is restrained and elegant, with a sophisticated color palette that doesn’t jump out at you until you are close and can see the many colors and shades that combine to create the beautiful esthetics.

There were only minimal changes necessary for the building to accomodate the religious needs of the new owners. Because of the readings done during services, the ceiling was painted white and lighted with brilliant halogen lighting, to good effect. The allegorical murals which were originally painted by Hungarian artist Willy Pogany, and were located on the walls of the lobby area, were said to have deteriorated beyond repair, and they were replaced by beautiful painted scenes more appropriate for a house of worship. The orchestra pit was converted into a baptismal pool. A slightly darker patch in the ceiling near the proscenium arch hides the sound system. After nine months of restoration provided by over 5,000 church members, the new Assembly Hall opened in August 1985, and has been the site for their religious conventions ever since. In more recent years, the Assembly purchased the space next door to the theatre and built an addition, to provide for more meeting rooms and offices.

The Assembly Hall/Stanley Theatre is open for free tours throughout the weekdays, conducted by courteous and knowledgeable volunteer tour-guides (these must be pre-booked via e-mail or telephone at least a couple of days in advance; tour times are between 8am-noon and 1pm-4:15pm). The tours are extensive and include a DVD presentation of the building’s history and the Assembly’s mission, and includes a complementary pack of postcards of the building. They will also lower the lights and turn on the stars and clouds during the slide presentation. Everyone is welcome to attend the weekend services, although they wont be able to give formal tours or demonstate the stars and clouds at that time.

The staff are very interested in further documenting the history of the Stanley Theatre’s early years, and encourage anyone with historical information or personal memories to contact them via e-mail: or on the telephone number above.

Thanks again Tinseltoes,everything is on you-tube now.

I wanted to tour this theatre next week. A call to the number lister said there are no more tours. Say it isn’t so, urgh!!!!!!!!

The Stanley Theatre in Newark (cinematreasures.org/theaters/6562/) is a virtual replica of the Stanley in Jersey City, albeit on a somewhat smaller scale (1,949 seats). The lobby is not an exact reaplica but is similar in style and fully atmospheric. That Stanley is also a church.

I remember it is a kid, wonderful, especially the starlit ceiling. I think I remember seeing people light up a cigarette now and then, that really stood out to a kids eyes. Want to get back to Jersey to visit it. Too bad the Tivoli and Fulton are gone.

i remember the stars and clouds on the ceiling when i was a kid. i remember going there for the last time around 1974. i think the picture was the lords of flatbush, sylvester stalones first picture i believe.

This theater closed during the short time lived in Jersey City. I regret I didn’t go to the theater before it closed. I do rememebr the last 2 films to play there were flat. I think I would have gone if they had one flat and one in scope.

For more information on the Stanley Theater and its developer, Jacob Fabian and its architect, Fred Wesley Wentworth, see the website www.fredwesleywentworth.com I have recently completed a book on their collaboration. REP

Clink link to see a video about the newest renovations to The Stanley Theatre.