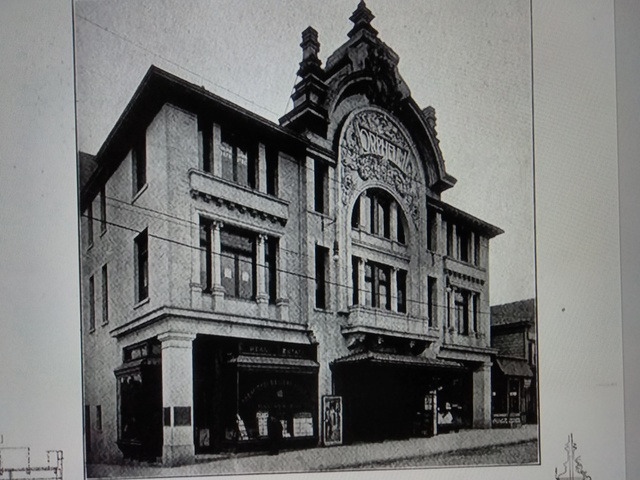 Opened in October 1, 1910 with the play “Zaza”. The Orpheum Theatre was located in the Five Corners section of Jersey City, and was fairly close to the "big three" theatres. It was quite large and ornate by any standard.

The Orpheum Theatre was closed and demolished around 1960.

I remember seeing Sammy Davis, Jr. and his father and uncle on stage at the Orpheum. I also remember the Bowery Boys (The Dead End Kids). I bet I saw many who later became big stars. If anyone else remembers any, please let me know.
Dorothy Ann Stengle

My cousin Caire was attending the matinee at this theatre on December 7, 1941 when the manager went on stage to announce that the Japanese had attacked Pearl Harbor and all Claire remember’s is everyone running out of the theatre and screaming. Claire would like to remember the name of the movie that was playing. If anyone remembers or can point me in a direction to find out, I would be most appreciative. Best Regard’s, Bill Bradley

An announcement that construction contracts had been let for a 1,400-seat theater at Five Corners, Jersey City, designed by William McElfatrick, appeared in the January 15, 1910, issue of Real Estate Record and Builders' Guide. The project was probably the Orpheum, and was probably completed well before the end of 1910.

The Orpheum was one of several New Jersey theaters briefly described in the January 4, 1919, issue of The Moving Picture World:

“The Orpheum, about 1,800 seats, James Brennan lessee and manager, is situated at Five Corners of the Hill section. It sustains a full orchestra and every modern equipment of an up-to-date theatre. Judging from the large attendance at the afternoon performance we are convinced that it is well patronized and established in a populous center.”

The Orpheum was expected to open around the first of October, according to this item from a September, 1910, issue of Variety:

“The new Orpheum on Jersey City Heights will first house Edna May Spooner and a stock company, upon opening about Oct. 1. Charles E. Blaney has the theatre, originally planned for vaudeville. Before commencing the stock engagement Miss Spooner will play four weeks in the New York vaudeville houses.”

My grandmother told me that her father (Eddie Mason) owned the Lyric, Lyceum, and several other Vaudeville Theaters in Jersey City and Bayonne. She also said they owned an amusement park in Bayonne and that’s where she met my grandfather. If anyone has any information, please let me know.

October 1st, 1910 grand opening ad can be found in the photo section.