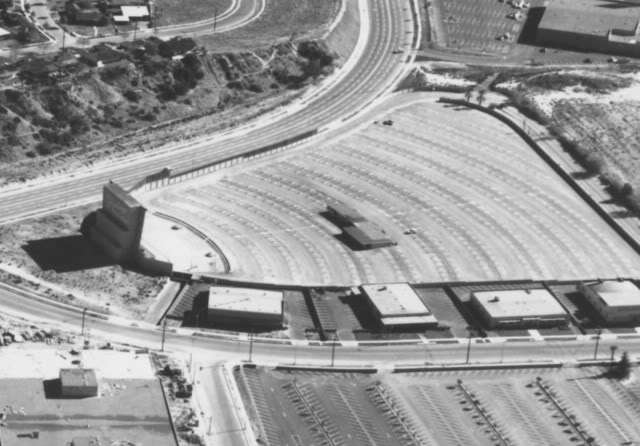 The Hastings Drive-In was opened on May 11, 1950 with Roy Rogers (who appeared in person with Dale Evans & Trigger) in “Bells of Coronado”. The drive-in was operated in 1955 by John Danz, Sterling Theatres & Judy Poynter. It was torn down in 1968 and was replaced by an indoor theater. The owner was Pacific Theaters.

The entrance is now Ethan Allen. Approx. address for this drive-in was 445 North Rosemead Boulevard.

A photo of the marquee of the Hastings Drive-In during construction, featured as the frontispiece of the Modern Theatre section of Boxoffice, October 7, 1950. An additional photo of the completed marquee by night appears on another page of the same issue.

I remember going to this theater with my parents when it first opened. The last time I went was March 1967. It was a wonderful place. They had a playground with swings, etc. for the kids, many of the real little ones were already in their jammies. Good family fun.

That was one gigantic drive-in!

Architected by the drive-in specialists, the Utah firm of Cartright & Wilson, its color-changing sign was both an attraction and distraction. Some cities banned the use of similar color changing signs for traffic safety reasons. Comet Theatre Enterprises Circuit launched the Hastings in 1950 operating it for just five years before moving on.

Whats the 4 buildings seen along the left hand side of the drive-in(looking at the screen)? Whats the name of the indoor theatre that replaced the drive-in?

The hardtop that replaced the drive-in was also called the Hastings. The four buildings along Halstead Street adjacent to the drive-in were for light industrial use.

The opening night’s attraction included personal appearances by Roy Rogers, Republic cowboy star, his actress-wife Dale Evans and Trigger. The outdoor showcase is being operated on a single-bill policy and an 80-cent admission scale.

Opening features on May 11, 1950 were Roy Rogers who appeared in person with “Bells of Coronado” supported by a newsreel, a Tom & Jerry cartoon in “Love That Pup,” the Tex Avery MGM cartoon classic, “Little Rural Riding Hood,” another Tom & Jerry, “The Lonesome Mouse,” the comedy short, “Grips, Grunts and Groans,” a travelogue, “From Liverpool to Stratford,” and the short, “This is America: State Trooper.”