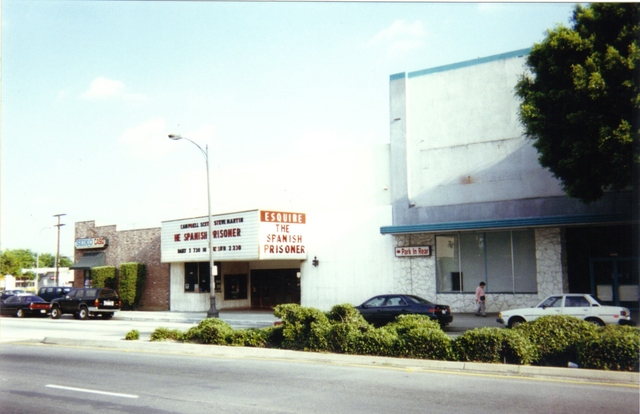 Built by and opened by Laemmle Theatres on April 1, 1964 with Ludmilla Tcherina in “The Lovers of Teruel”. It closed in late-2000, the former Esquire Theatre was converted into a bank in 2004.

I share Meredith Rhule’s grief that the Esquire, which I managed for the Laemmles for four years beginning in 1980, is no more. I understand the Laemmles even used to schedule chamber music concerts there in earlier years. A little culture never hurt any neighborhood.

The Esquire and Colorado did close due to the Laemmle 7-let’s not forget the closing of the wonderful State Theatre as well. I saw one of the last movies shown at the Colorado in November of 2000- “Yi Yi”, then they were showing “Crouching Tiger Hidden Dragon” through christmas, and that was it. The theater was in awful bad shape when I went, they must have known for some time it was going. A good amount of seats were broken. Never went to the Esquire.

Here is the location today:
http://tinyurl.com/4ghd59

The exact opening date for the Esquire was April 1, 1964, according to the April 6 issue of Boxoffice Magazine that year. The opening movie was the French ballet-drama “The Lovers of Tereul”.

Among the unusual features (for that time) of the Esquire were a wheelchair platform accommodating four persons, and a row of seats wired to the sound system for hard-of-hearing patrons.

The interior and exterior of the theater, which was located in an existing building, was designed by motion picture art director Eugene Lourie.

Oh, I forgot to include that Boxoffice gave the Esquire’s seating capacity as 525.

I also mourn the closing of the Esquire, as my father managed it in the late 60’s and early 70’s — I had many great times there as a kid. Using my blog, we are actively seeking out his staff from that era, but would also welcome comments from anyone who has a memory they’d like to share. If either of the above describes you, please stop by and leave a comment at http://blog.claysteiner.com

(If you’re reading this as an older post, you may need to search “Esquire” in the search box at top right of the front page.)

Sweet. It was a Washington Mutual branch. This may mean it will be a theatre again very soon.

At least the bank is using the marquee instead of ripping it down.

Apparently the Esquire was one of the very few theaters anywhere to host a theatrical showing of The Beatles' 1967 made-for-tv movie “Magical Mystery Tour” (May 17-19, 1968). http://www.concertposterart.com/images/posters/detail/Beatles-Magical-Mystery-Tour-1968-LA-Film-Movie-Poster-Type-Ad.jpg