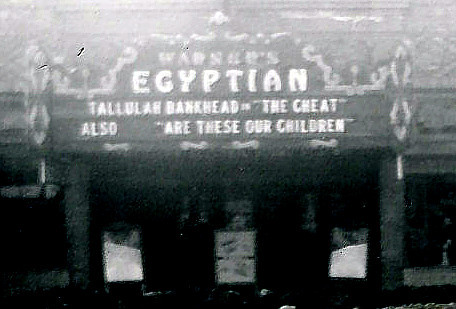 Located in the Lamanda Park - East district, to the east of Pasadena. The Warners Egyptian Theatre opened May 6, 1925 with Wanda Hawley in “Stop Flirting” on the screen plus acts of vaudeville on the stage. It was built for and operated by Henry Warner. Theatre operator Henry Warner was not related to the famed Warner Bros. The theatre has an Egyptian style theme, which is retained today. Seating was provided all on one level, with no balcony.

It was renamed Uptown Theatre on September 15, 1936. It was closed in the early-1980’s. The lobby area was converted into retail use as an antique furniture store, with the auditorium used for storage.

In the early-2000’s, the building was leased by a new operator, who planned to restore and re-open it as the Oasis Theatre. Repairs and redecoration work was carried out and some new seating was being fitted when the project came to an abrupt end, due to disputes which occurred between the lessee and the building’s owners.

Since then it has remained shuttered and unused. It now remains one of Pasadena’s most endangered buildings. The original 1925 fire curtain, with original local advertisements painted on its front, still remains in situ.

Thanks to Tami Strong of Bisbee, Arizona the original signage of the “Warner Egyptian” at 2316 E. Colorado Boulevard, Pasadena, CA. has been rediscovered. Her grandfather was the theater manager in the late twenties and early thirties. The link at
View link
will show the marquee as it appeared in 1931. Although blurry the large roof sign displayed a colorful “Chariot of Ramses” scene atop
the original electric sign. The tall brick facade behind the theater
vertical sign fell years ago in an earthquake and was leveled to the existing roof line. If you have more information on this historical theater or old photos you can share contact Jim Perry (626) 524-2014
or email to

If the above link does not work for the Warner Egyptian signage try this one at http://www.chosenfew.com/musicvideo/egyptian.jpg
Enjoy. Jim Perry

Found the original signage for the Warner Egyptian courtesy of Tami Strong of Bisbee, Arizona. http://www.chosenfew.com/WARNEREG.jpg
Had to do some retouching to enhance visibility of the marquee and
signage. This is from 1931 showing of “The Cheat” starring Tallulah
Bankhead. Enjoy. Jim Perry

The link didn’t work for me.

The description currently says that this theater originally presented movies and vaudeville, but I remember the building quite well and it had no stage house. Despite its fairly lavish proscenium, I don’t think the stage was very deep, and it certainly had no fly tower. The theater was built as a movie house, and its minimal stage facilities could have accommodated only the simplest live events.

However, there is enough room at the back of the lot that a proper stage house could be added on to the building, should anyone with very deep pockets want to convert the place into a regular live theater— though in a town that was unable to save the Raymond Theatre, which already had a generous stage, I don’t know who would want to make such a commitment to the old Egyptian.

I was never in the Uptown after the 1964 renovation, but I don’t think there were any significant changes to the auditorium. I saw a couple of movies there in 1962, and it looked pretty much as it does in the photos on the CinemaTour page, except for the paint job. In 1962 it was all quite dark.

“The Encyclopedia of the American Theatre Organ” by David L. Junchen, page 628, lists a “Pasadena Theatre” in Pasadena, California, as having a three manual Smith theatre pipe organ.

No other details, such as # of ranks or installation date, are given.

I could not find a “Pasadena Theatre” listed on this site right now (April 2014) but this has a fairly close name. However, according to Lost Memory, the “Pasadena Photoplay Theatre” (listed on its own page) apparently had only about 350 seats, and most three-manual theatre organs had at least ten ranks.

The largest known Smith organs were both 4 manuals and 16 ranks, so that this organ in question was probably between 10 and 14 ranks, or so.

This is quite large for a little 350-seat theatre, since most theatres of this size either had a photoplayer (such as those made by American Photo Player Co, or Wurlitzer) or simply a person playing the piano, or, if an organ, nothing larger than about six or seven ranks (and thus, two manuals). Thus, I think it is unlikely that the aforementioned house is the same theatre mentioned in the book.

Does anybody know more about this instrument, or a larger “Pasadena Theatre?” in Pasadena?

NOTE: I also think the Egyptian/Uptown opened at the right time, and was probably of the right size, to have had such an organ, so I’m also putting this here for the time being.

A photo of this theatre is featured in the 15 May 1926 edition of “Exhibitors Herald”, held by the Museum of Modern Art Library in New York and scanned online by the Internet Archive. https://archive.org/details/exhibitorsherald25unse

Grand relaunch ad for the September 15, 1936 rebranding as the Uptown Theatre under new operators is in photos along with the original opening ad