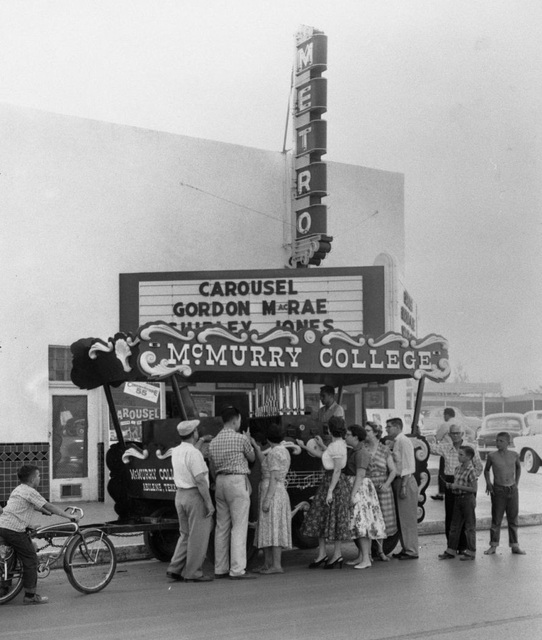 Here is a 1984 photo. Style is quonset hut as mentioned above.
http://tinyurl.com/cnkruj

Now I’m really confused. I can’t find a photo from 4/28/09. The photo Don Lewis linked to was dated as having been taken on May 11, 2009. Assuming it does depict the Metro, and the date is correct, we’d also have to assume that the Metro was demolished, the new multi-story building seen in Google Street View was built, and Google came by to take new photos of the block, all in the last 12 days.

I’m not saying that such a thing couldn’t happen in Texas. Just that it’s very unlikely.

That new building belongs to the Salvation Army and is apparently some sort of rehab center. It has the same address as the theater, so (assuming the theater address is correct) the Metro is gone. The Salvation Army building looks no more than a few years old. Unfortunately, Historic Aerials only has a 2004 photo for the location, and it’s too blurry to tell if the theater was still there then or not. I’m quite sure it wasn’t there on May 11 this year, though.

Back in 1969, when I was 12 years old, I lived on Beechwood Ln. On Saturdays, the Metro Theater must have held Saturday afternoon matinees where movies cost 50 cents to get in. I’d go with the neighbor girls who lived near by and we get dropped off and paid the admission fee and go sit in this cheap movie theater and all they would show were old black & white unknown Westerns. One I can recall was called “Lemonade Joe” and none of these movies were ever familiar to me. I wasn’t given money for treats just the admission. I never saw an old lady walking around with a flashlight. I got so bored in this theater that instead of watching what was playing I sat there and looked at the curved ceiling. It never go that dark in there either. The floors were plain concrete and the seats I believe were made of wood. We were not asked to leave but were allowed to sit there as long as we wanted. When I got older and had dates we’d go to a Saturday movie in the evenings when they were playing first run movies. I guess they played old junk you never heard of for the matinee. Imagine being dropped off with your friends at a movie theater and no pesty parents were there with you to embarrass you. It’s kind of hard to do that today. In June of 1976, I left Abilene because my job at the Aileen’s Clothing Factory closed down. I was delighted to see a photo that someone took of the Metro Theater before it was demolished. Thank you whoever you are that took this photo. I also don’t remember when this theater was closed or demolished.

The photo shown is not the old Metro theater. This building is still standing and is located at the north-west corner of Butternut St and South 20th St in Abilene. The Metro was deconstructed and moved south down Butternut to parts unknown. I know this as I watched it being moved down butternut by a house moving truck/trailer back in the early 80’s. The Metro was located on the west side of Butternut St. in the 800 block. The Salvation Army headquarters are located there now. You can see a vintage photo of the theater being constructed at the following link: http://texashistory.unt.edu/ark:/67531/metapth55156/?q=metro

Notice that the metro was a full quonset hut design (half tube) but the building shown above is a partial tube design.

The Metro Theatre was billed as Abielene’s first suburban theater. The south side suburban got off to a very rocky start and didn’t appear to be a theater which would be operational for more than thirty years. But it did just that. The theater was built by James H. Griffin and all 526 seats of the quonset hut styled theater were on the main floor. A brick front held the attraction sign, lobby, ticket area and the projection booth. Just prior to opening, Griffin sells out to I.B. Adelman’s circuit which consisted of the Adelman Theater in Houston, the forthcoming theater in Dallas, and a Fort Worth theater. Adelman launches the theater on October 17, 1946 with the film, “Ding Dong Williams.”

A year later, Adelman Circuit has had enough of the Metro and sells to Tom Griffing. Griffing would close the Metro less than six months later April 3, 1949. Its future was uncertain. But on Nov. 11, 1949 the theater would re-launch, find its audience, in part, by marketing and drawing crowds from nearby McMurry College. It featured “popular” priced runs of films such as “The Ten Commandments” and “Ben Hur.” These elements helped the Metro make it past its thirtieth anniversary as a successful suburban.

Remnant of the Metro Theatre building as it stood and was photographed in 2009.

Had my 12th birthday at the Metro. Saw Fantastic Voyage.