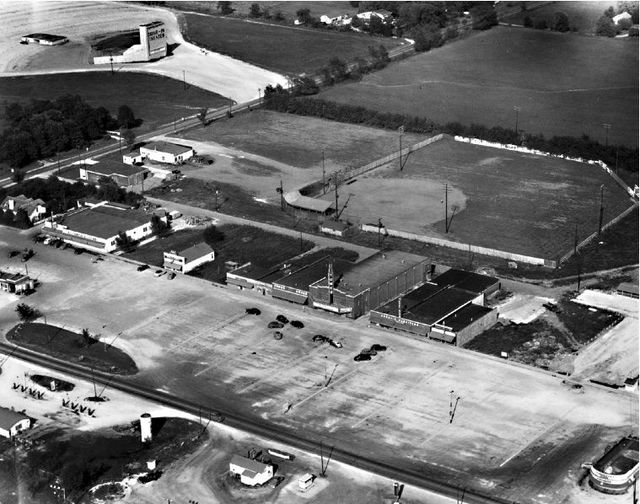 Opened on August 19, 1947, the city grew to surround the theatre on three sides with businesses and restaurants.

It had a fully enclosed wooded screen tower of the typical genre, with a white picket fence enclosing the playground in the front. Looney Tunes characters were painted on the tower wall facing the playground, along with hardwood free-standing cartoon characters in concrete buckets placed here and there.

The concession stand, which had been added to at least four times over the years, was dual-laned and simply decorated. White tiles on the walls, off-white with blue, yellow and red speckled tiles were on the floor, the kitchen was stainless steel. The ceiling was very low, you could reach up and touch it without even straightening your arm. The original managers office was off the lobby and the city managers office was in the rear with a private entrance.

In early-1970, the city manager moved to the Queen City Twin, and the manager moved into the empty office. The former office became inventory storage. The projection booth was below ground level and featured twin carbon-arcs. Another somewhat unusual feature were the two sets of outdoor seating on either side of the rose garden fronting the booth. It was wired for sound, so you could sit and wait for someone in the concession or cool off if your car was just too hot on a hot summer night.

It was a wonderful theatre that started out with first run films in the 1940’s, went to second run films in the 1950’s and sadly ended it’s reign hosting the rather benign R-rated features of the 1970’s. It was closed on October 7, 1978 after loosing its 30-year lease renewal. The final program was a 5-movie Ma & Pa Kettle marathon. It was demolished in late-October 1978 to build an office complex known as Corporate Square. To the rear at the time of its closing there was still a neighborhood.

The 40 Highway Drive In Theater in Kansas City was first drive in to open the state in may 1942. The news paper article in picture section says 1948 and 1938 as opening date.

A special section of the April 10, 1961 issue of Boxoffice had a photo spread of the playground equipment at the Springfield.

Darrell D. Manes, Commonwealth Theatres city manager, said the Springfield “enjoys the patronage of a very well-to-do clientele. Most of the cars on its ramps are Cadillacs and Chryslers, Manes commented.”

The first appearance of a Springfield MO drive-in in the Film Daily Year Book was the “Park-In” in the 1948 edition.

The “Drive-In” was in the first Motion Picture Almanac drive-in list in the 1950-51 edition. All MPA list mentions:

Sure enough, in the Theatre Circuits section of the MPAs, Commonwealth showed the Drive-In / Springfield Drive-In in its holdings beginning in that same 1950-51 edition, even though it took the drive-in list a decade to notice.

SPRINGFIELD, MO. – The local drive-in has sued the nearby Sunshine baseball park for $10,000 damages as the result of the floodlights from the park. The suit forced several changes in the semipro baseball schedules.

“JEFFERSON CITY – Articles of Incorporation have been granted by the (Missouri) secretary of state’s office to the Springfield Drive-In Corp., authorizing it to own, operate, manage and carry on a general theatre business and to issue up to 100 shares of $100 par value stock. Incorporators were listed as R. M. Shelton, F. L. Moore and R. P. Lyon. Shelton is vice-president and general manager of Commonwealth Theatres, and Moore is listed as secretary-treasurer of the circuit.” —BoxOffice, Jan. 10, 1953

Aug. 23, 1947: “KANSAS CITY — Two new drive-ins have opened and one is to open soon in this territory. O. F. Sullivan’s second outdoor theatre in Wichita, with a capacity of 750 cars, and Sam Taft’s open-airer in Springfield, also with a 750-car capacity, opened this week. Perish Woodson plans to open his drive-in in Topeka within two weeks.”

Also Aug. 23, 1947: “SPRINGFIELD, MO. — The Springfield Drive-in Theatre, of 750-car capacity, was opened by owner Sam Taft, Tuesday, August 19. The new theatre is RCA-equipped throughout, including the latest type of in-the-car speakers. The order for the equipment was placed through Cine Supply of St. Louis and George McDonald of that company was here supervising the installation of equipment. For the past several years Taft has been manager of the Drive-in Theatre in Des Peres, near St. Louis.“

Sept. 20, 1947: “SPRINGFIELD — The Springfield Drive-In, a mile east of town on No. 66, staged a grand opening Friday night, September 19. Accommodating 800 cars, the outdoor spot boasts of the finest equipment and appointments. If the weather remains normal, the situation will remain open for about two months, then will close until next April. The management advises that patrons on foot will be seated on comfortable chairs provided near the front.”

The Springfield’s final night was Oct. 7, 1978. On its final weekend, it ran a five-movie Ma and Pa Kettle marathon. Its newspaper ad read, “After being in business since 1947. This Saturday will be the last time you can see a movie at the Springfield Drive In. We will be closing down.”

By the way, the Film Daily Year Book that I mentioned here for listing the Park-In in its list of drive-ins, was wrong. It turned out that Springfield’s Park-In was an indoor theater was a confusing name.