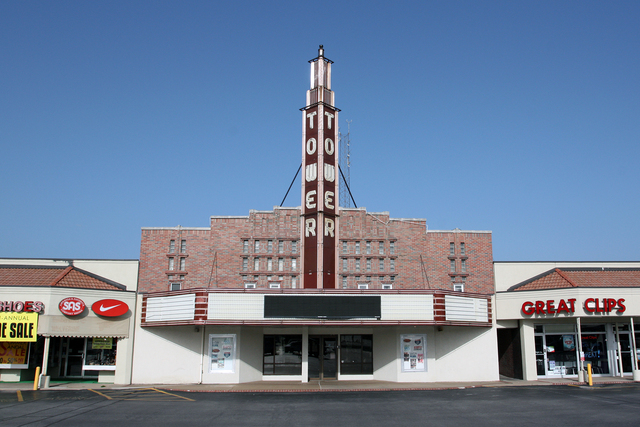 The Park-In Theatre opened on August 31, 1947 with Gregory Peck in “The Yearling”. It was really a nice Art Deco style neighborhood theatre located on S. Glenstone Avenue at E. Sunshine Street. On August 22, 1948 it was renamed Tower Theatre.

The front was done in a light colored brick with rows of brick extending outward to give a column effect. There was a large tower extending about twenty feet above the theatre with ‘Tower’ in bright neon.

It had a large rectangular marquee with attraction panels on each side. A nice sized lobby and spacious auditorium.

The Tower Theatre finally lost its drawing power to all the multiplexes that were popping up around Springfield and finally closed its doors in February 1997.

When the Tower first opened it was known as the Park-In theater.
This web site has it listed as the Tower Park-In Theater and incorrectly labeled as outdoor.
http://www.cinematour.com/theatres/us/MO/10.html
When my brother-in-law managed the theater he had a grand opening photo framed in his office where it was called the Park-In. According to him they changed the name because people were confusing it with a drive-in theater (which is probably why the confusion in the listing at cinematour).

The final film shown was actually One Fine Day in February 1997.

I miss this granddaddy of Springfield theaters. It was a majestic old palace and those of us who grew up in the 80s remember it fondly. I was devestated when I heard that it would close and outraged that a radio station would move in there, especially since they gutted it.

Perhaps one day the building will be saved and the radio station evicted to make way for a refurbishment and a re-instatement of the lavish interior.

That may never happen. KGBX is one of the city’s top radio stations and they could never be evicted.

A 1987 view of the Tower Theatre in Springfield here and here.

When I was a kid, the Tower would show Paramount, MGM and Universal pictures. The other theatres downtown (Mann Fox) got Warners, United Artists, 20th, Buena Vista, Columbia releases. In the mid 60’s all of this changed. I remember when MY FAIR LADY played Springfield it was at the Tower. That was a first- Warner Bros. film at the Tower. After that the bookings were split between all of the theatres.

I did not go to this theatre a lot, but I do not remember it being what I would describe as “lavish.” However, I remember going to this theatre in its later years each time with a sense of the history of the place. Something this theatre had in its earlier days, my father once told me, was a crying room, for parents to take noisy children to as needed. The theatre had a side exit that came out to the left of the main doors as you exited. There were coming attractions cases in this small exterior passage. The cases are intact.

I remember a hot summer day in 1977 I was visiting my grandparents in Springfield and my Grandma(RIP) dropped me off at Tower to see Herbie Goes to Monte Carlo. While waiting outside there was this strange movie poster of a movie called “Star Wars”..this had to be late June or early July so Star Wars must’ve already released but I guess Tower wasn’t able to show it just yet. Anyway, I ended up seeing Herbie and don’t remember a thing about it except that Dean Jones was one of the main actors.

The Park-In Theater launched August 31, 1947 in the brand new Plaza Shopping Center on Gladstone. It’s opening film was “The Yearling.” The neighborhood theater was next to Park-In Furniture as meterless parking by the door was aggressively marketed as a chief advantage by the shopping center. But almost immediately, people were confusing the Park-In bookings with the popular Drive- In Theater’s elsewhere in town. Nearly one year later, the theater was rebranded as the Tower Theatre on August 22, 1948 and would celebrate its first anniversary under that name eight days later. The theatre closed at the end of its second 25-year lease in 1997.