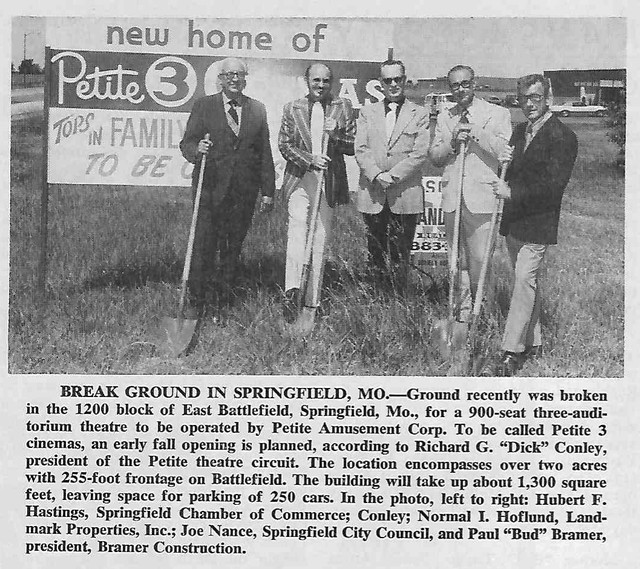 The three screen Petite 3 Theatre opened April 19, 1973. It was one of the first to open around the Battlefield Mall. This 700 plus seat theatre lasted until 1992 when compitition from the newly opening multiplexes took its toll on the Petite 3 Theatre. The last couple years it was operated as a discount theatre.

The Petite was THE theater for teenagers, as I recall. My high school (Glendale) even took their yearbook pictures in the lobby. They always seemed to get the “cool” movies, despite having dinky auditoriums. For about 12+ years, the Petite and Fremont were fierce rivals, being across the street from each other and both about the same size. Both were done in by the Campbell 16 that Wehrenberg opened in 1996.

The theatre opened as a Dubinsky theatre and became a Dickinson theatre on December 2nd, 1983.

The theatre was closed from November to December 1985 for remodeling and reopened on December 20th, 1985 with 101 Dalmatians, Plenty and A Chorus Line.

The theatre would switch to second run on November 27th, 1991, less than two weeks after the Dickinson (now Springfield) 8 opened with The Naked Gun 2 ½, Backdraft and V.I. Warshawski.

This would not last long as the theatre would close less than six months later on May 17th, 1992 with Medicine Man, Hook and Blame It On The Bellboy.

Actually, it was less than a week later.

I was working at the Eastgate theatre in Joplin as a projectionist at the time this theatre closed and we received two Strong lamphouses from this theatre which were installed a few weeks after it closed in our auditoriums 4 and 5, and likely they were still in use when Eastgate closed.

One of the prior comments indicated this opened as a Dubinsky operation. However, I’ve come across trade reports indicating it opened under a company called Petite Amusement. Can anyone clarify the ownership timeline?

Worked there and at Northtown 3 (later 4) under Dubinski Theaters when Dick Powell was manager…..It was conveniently located between a fitness center and a liquor store….Auto repair shop located there now… 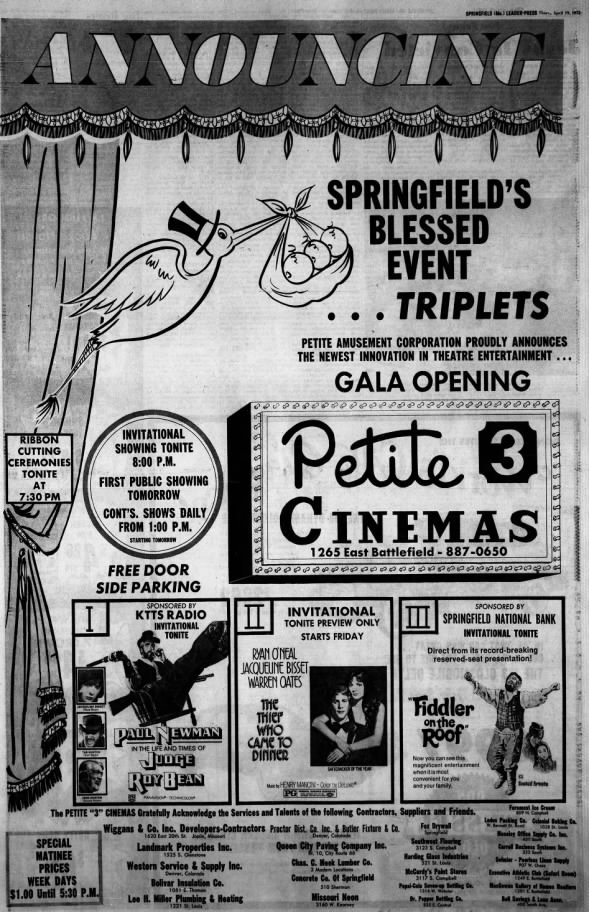