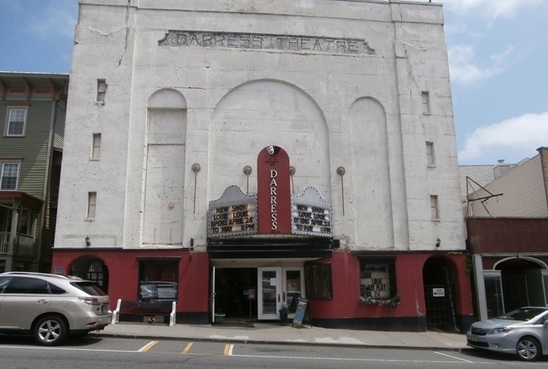 Built in 1919 and opened as the State Theatre. The Darress Theatre is a ‘reverse’ theatre, where the audience enters from behind the screen. The theatre has a balcony which is entered from down the side of the building.

It now mostly a venue for live theatre, music and comedy acts, but still shows an occasional silent film. In September 2015 the theatre was ‘For Sale’ as a going concern. It was purchased by the town in February 2021.

TC-
If you are ever considering selling the theatre; please let me know!

Anyone looking to experience the best of both worlds might want to checkout the Darress Theatre on March 22nd, 2008.

The historic ‘reverse’ Darress Theatre will be hosting a screening of the Indie film CONFERENCE ROOM C, which was shot (and will be projected) digitally.

The Darress is a fabulous space, and provides a truly unique viewing experience…you truly do feel transported in time when you enter the auditorium. The producers of CONFERENCE ROOM C are honoured to offer their film in this cinematic landmark.

Hey, we just got a new review of CONFERENCE ROOM C and figured weâ€™d share it.

(As is mentioned in the review, donâ€™t forget that CONFERENCE ROOM C will be screening at the historic DARRESS THEATRE on March 22, 2008 at 8pm. Seeing as this will be a Saturday night, why not make plans to spend the evening with us and have a different kind of night out?

There will be a Q&A session following the film, as well as refreshments.

For anyone who has already seen CONFERENCE ROOM C, why not bring a friend out to see what all the buzz is about…and for those who havenâ€™t seen it yet…what are you waiting for? This screening will be the perfect time to catch the wave!

Tickets for this event are $10…with 100% of the proceeds going towards the upkeep and restoration of the historic DARRESS THEATRE, which is a very special venue. The DARRESS is one of the only surviving â€™reverseâ€™ theatres that is still in operation. â€™Reverseâ€™ theatres were a architectural rarity back in the heyday of movie palaces…and there are only about 3 left standing in the world…and very few of them still operate as working theatres. We working hard to ensure that our screening lives up to these special surroundings.

We look forward to seeing you at this fabulous event.)

Now, onto the review…

This review comes from the MYSPACE FILM COMMUNITY, and was written by the director of that site, Anthony Thurber.

The original review can be found at http://www.myspace.com/filmindex

However, for those of you who are link challenged, the full text of the review has been pasted below:

Conference Room C has won awards at the Pocono Mountains and Wildwood by the Sea film festivals. The film is about the pressures of business wherein five people are in an ordinary business meeting, until tempers begin to flare and they are forced by their board of directors to come up with a decision that going to make them feel horrible about themselves. This turns this business meeting into a debate about various controversial issues regarding class, race, and sex.

Conference Room C is 12 Angry Men for the corporate world. Director Rob Buck does a great job creating a voyeuristic eye in the world of corporate business. I like how he and screenwriter Wayne Thorpe portray corporate America as a kill or be killed environment, as they take aim at the soul of corporate culture. Buckâ€™s direction of the actors was good as their performances were dramatically intense. He uses the digital video format for this film, to give the film a realistic tone. The screenplay, written by Thorpe, was very intense and does a very good job exploring various issues like race, gender and ethnicity and the frightening aspects of each that exist today. Both Buck and Thorpe did a good job focusing on the characterâ€™s dilemma, which makes the elevated tensions even higher.

The acting in the film was very good. The actors really sink their teeth into their roles, and the chemistry with each other helps increase the filmâ€™s tension. Two particularly good performances come from Pete Smith and Tremayne Pinckney. Their portrayals were very intense, especially with each other, as their characters had to be very authentic for the film to work.

Conference Room is a heated movie that explores the behind the scenes of corporate America. You can catch a screening of this film at Darress Theater in Boonton, NJ on March 22nd at 8pm. Tickets are $10 dollars each.

I would love to check this theater out sometime, but don’t have enough money to go see a show or a movie there.

There are some interesting discrepancies among various sources of information about the theater and about Mr. Darress. The theater web site has a picture of Charles Darress. Boxoffice Magazine’s issue of May 14, 1979, has an article about recent two theater closings, the State being one of them, and it says that the theater was opened in 1922 by Clare Darress.

Then there’s this page about a landmarked house for sale in Boonton, which says the house was designed by “…Clair Darress, a famous architect of many homes in the area, and creator of the Darress theatre on Main Street.”

Whether Charles, Clare, or Clair, it seems reasonable that, being an architect, Mr. Darress would have designed his theater himself.

i think i remember this as the State in the 70’s and 80’s. you would enter from beneath the screen. it was confusing because you could hear the movie, but you didn’t see it until you realized where you were.

I visited this several times decades ago, but always knew it as the State Theater. It would be hard to enter this place without being noticed, since the audience is looking you in the face as you enter. Both sides had several opera boxes. A Kodak film shop rented some space to the right in the lobby.

1952 photo as the State Theatre added via Dave Wardamasky.

The Darress Theatre has been sold to the Town of Boonton. Contact the town for information on future plans for the theater.