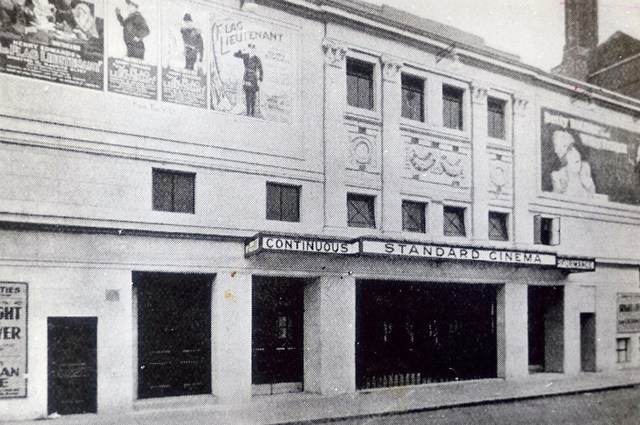 Listed as being located in London Fields, but in reality was in Haggerston/South Hackney inner city district of east London. Opened in 1911 as the Electric Cinema (architect unknown), it was soon re-named Olympia Cinema. In 1912, it was re-named Standard Cinema with 882 seats. The building was operated as an independent cinema by the Wassersug family. Originally the facade was a low single storey with a raised centre section over the main entrance which had a series of decorative arches and windows. Inside the auditorium it was fairly basic with exposed roof tresses and very little decoration. It was equipped with a small organ to accompany the silent films in the early years.

Around 1925 it was taken over by Lou Morris and in May 1927 it was rebuilt from a design by noted cinema architect George Coles, only the existing outer walls were retained. It was equipped with a Christie 2 Manual 8 Ranks organ which was opened by organist Charles Willis. In 1935 it was modernised, again to the plans of architect George Coles who this time gave the building a streamline Art Deco style with a modern facade. The seating capacity was now increased to 1,153 when it re-opened on 17th October 1937 with Jean Harlow in “Reckless”. It was now known as the Standard Super Cinema.

It closed on 19th November 1960 with Richard Carlson in “Creature From The Black Lagoon” and Joyce Holden in “Life After Dark” (Girls in the Night). For several years it operated as an independent bingo club and it was last used as a snooker club known as the Hackney Snooker Club. The main entrance became un-used and snooker club players entered at the rear of the building via one of the front stalls exits.

It was demolished in August 2006 and housing was built on the site.

The Standard Cinema was equipped with a Christie 2Manual/8Ranks theatre organ in 1927. It was opened by Charles Willis.

I have just found that this originally opened in around 1911 as the Electric Cinema. Within days it had been re-named Olympia Cinema. It became the Standard Cinema from 1912 and had a ‘straight’ pipe organ to acompany the silent films.

Looks like demolition is now in progress from this photograph dated 4th August 2006:
http://flickr.com/photos/sarflondondunc/209029691/