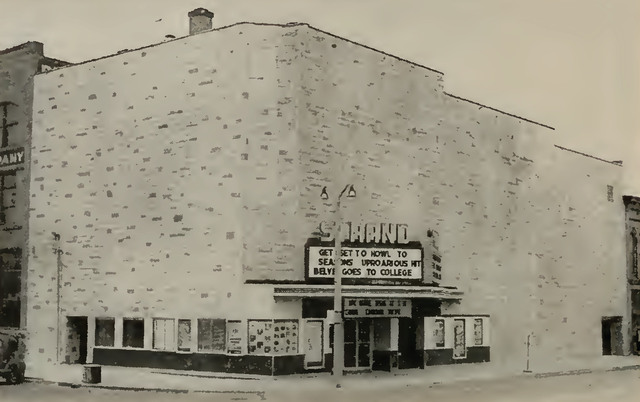 The Strand Theatre was originally a large single-screen movie house. It was rebuilt in 1950, retaining only two walls of the original theatre. It was later split into 4 screens by the Milwaukee firm of Holt & Holt. One more screen was added in the mid-1990’s.

All of these renovations were tastefully done and the front end of the original theatre was preserved and is now one of the large auditoriums. The Strand Theatre continued to show first run films until its closing on March 27, 2014. It is now an activity center named Strand Adventure, containing rock climbing, laser tag, battling cages and bouncy castles.

She also was a welder at the shipyard that built the shows main subject. The USS Largato that was built in Manitiwoc, and missing in action since 1944. Found sunken recently in the Gulf of Siam. (Thailand).

The show used a B&W shot of the Strand from the `40’s, and old interior footage of the auditorium & stage. Complete with the old intermission reel of food dancing off to the lobby.

This has been a six screen theatre for some time now. The original house was split into three theatres, with the lower area split in the middle and the balcony becoming a small theatre of its own. A fifth screen was added, and later two more in what was the parking lot. I worked as a manager here about ten years ago and I remember hearing that the theatre was re-opened in the seventies, so it might have been closed down for a while. At one time, the six theatres were named after old theatres in Manitowoc (the Capitol, Orpheum, other I do not recall), although this never really took and they were always refered to as theatre 1, theatre 2, etc.

This theatre was also closed for a while in the late 50’s and 60’s. Probably a rare example of one of the big houses that closed and later re-opened as a first-run cinema. I was told that the first film shown upon its re-opening was “That’s Entertainment!”

(Sheboygan Press, September 24, 1974)
Strand To Reopen At Manitowoc
MANITOWOC – Plans are underway to reopen the Strand Theater, which has been closed for 15 years.
The reopening set for about Oct. 16 was disclosed by Robert Johnson, president of the S-T Corp., Sheboygan, which will operate the theater. The S-T firm also runs the Wisconsin Theatre in the City of Sheboygan.
Johnson said a lease has been worked out with J & J Realty Co., Sheboygan, which formerly leased it to the Marcus Corp. Improvements are being made to the interior and exterior of the building at the corner of N. Eighth and Chicago streets. The theater will have new projection equipment and a new screen measuring about 30 feet wide and 14 feet high. Exterior improvements will include a new canopy over the entrance. Seating will be reduced slightly to accommodate about 800 persons. Johnson said the Strand will offer varied film fare similar to that shown at the Wisconsin Theatre, which also has an 800 seat capacity. Most of the Wisconsin offerings are G and GP rated, he said. Plans are being made for off-street parking to accommodate theater patrons. The S-T Corp. purchased the old Opera House property to the north about five years ago.

(Manitowoc Herald-Times, Wednesday, March 28, 1951)
A Challenge to Parents
Vandalism of Teen Agers in Theaters, Buses Gets Worse
How can youthful vandalism in theaters , buses and public places be curbed in Manitowoc?
This is the question now confronting law enforcement officials as a result of continued depredations, which are getting worse instead of better. The damage is running into the hundreds of dollars.
Worst instances of the acts of teen agers have been in two Manitowoc theaters, the Capitol and Strand. Seats have been cut open, initials carved in walls, and sides cluttered up with initials and markings with red lipstick.
Manager R. S. Guiterman of the Capitol estimates that in the last five months over 150 seats have been damaged. Some are almost beyond repair. Repair bills run in excess of $3 a seat.
At the Strand almost as many seats have been damaged along with deep gashes cut into the side walls with sharp instruments. Even the rest rooms are not immune. Conditions have become so bad in the movie theaters that the management is considering discontinuing the use of student tickets. By these tickets the students gain admission to theaters at a reduced price. Making the teenagers pay full fare, managers believe, might tend to stop this vandalism . Those who pay the full price for a movie usually go there to see the picture and not to cause damage.
The rear wall on the mezzatiine floor of the Capitol theater is an example of the lengths gone to by the teen agers to mark up the painted wall. Some of the markings are so high on the wall those guilty must have stood on the seats to do their marking. Bright red lipstick was the principal item used to mark up the walls.
New pushback seats in the Strand were the particular target of the pranksters. Many of the seats are so bad they cannot be used and will have to be replaced with new seats. Real problem, of course, is to catch the guilty persons in the act of vandalism. Ushers patrolling the aisles are not able to detect the guilty ones.
Closing off the mezzanine and balcony of the theaters is one proposal but in nights when there are big crowds, particularly during the week end, this also poses a problem.
Parents might be the answer. They might do a little detective work right at home and find out if their sons and daughters went to the theaters to see the movies or to work havoc to the furnishings.

A March 4, 1950 Boxoffice article about the Strand said that the recent rebuilding of the house had been so extensive that only two walls of the original building remained. The owner of the theater, Nick Johnson, had come to Manitowoc in 1935 to manage the Strand for Fox Wisconsin Theatres, and had taken over the house as an independent operator in 1945. The rebuilding included removing a stage, so the theater probably dated from the 1920s at the latest.

The building is now occupied by a place called Strand Adventures, which bills itself as a “family entertainment complex,” featuring a rock climbing wall, a laser tag arena, batting cages, a room full of bounce houses, a toddler area, something they call a “ninja gym” and a section of arcade games. Judging from photos on their web site, nothing remains of the theater’s interior.