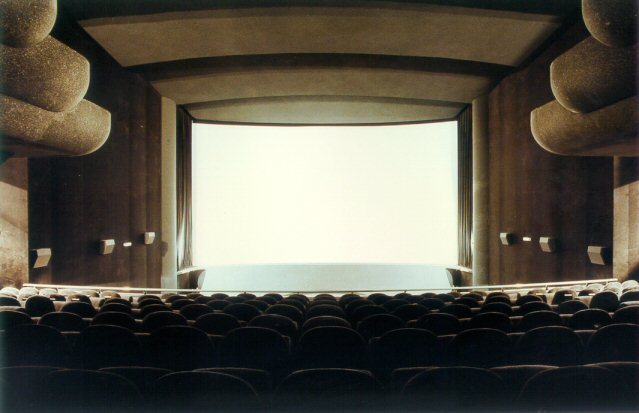 Opened as the 1,200 seat Kosmorama on 14th May 1912. After the success of the first Pathe-Journal opening on Boulevard Saint-Denis in April 1912, the Kosmorama became the second Pathe-Journal cinema on 15th October 1913. Taken over by Max Linder, it was re-named Cine-Max Linder on 18th December 1914. It was remodeled and re-opened on 14th March 1919 with “le Kaiser la brute de Berlin”,

Originally opened in May 1912 as the Kosmorama, it had a seating capacity of 1,200. In December 1914 it became the Cine-Max Linder. It was modernised into an Art Deco style in the 1930’s.

Totally modernised again in 1987 it now has seating for 700 (300 Stalls, 250 Mezzanine and 150 Balcony). The auditorium interior is totally black so that all focus is on the screen. The cinema is THX certified and can screen 70mm film.

A 1995 photograph of the Max Linder Panorama:
View link

The Max Linder has a Panorama (Cinerama) screen of 18 meters, THX, sound and 700 seats on three levels. In 1914 silent film comedian Max Linder decided to realize one of his old dreams: to start a cinema. He bought a cinema with 1,200 sears, created in 1912, the Kosmorama. The CinÃ© Max Linder opened in December 1914. Linder closed his cinema in 1923 but it was reopened by PathÃ© in 1932. In 1957 the interior was modernized. The last changes took place in January 1987.

Here’s a night photo from May 2009, and a postcard and a bio of founder Max Linder.

The Kosmorama in Paris was established by the Norwegian Halfdan Nobel Roede (1877- 1963) who entered the cinema-business in 1911 in Oslo. He probably sold out in 1914 due to the building of Paladsteateret, a prestige cinema theater in Oslo. Until the municipal of Oslo took over all private cinemas in 1926, he was the largest cinema owner in Oslo. He was involved in other cultural activities, as a composer, theater manager and art collector. Nobel Roede decorated his cinemas with paintings of Edward Munch and others.