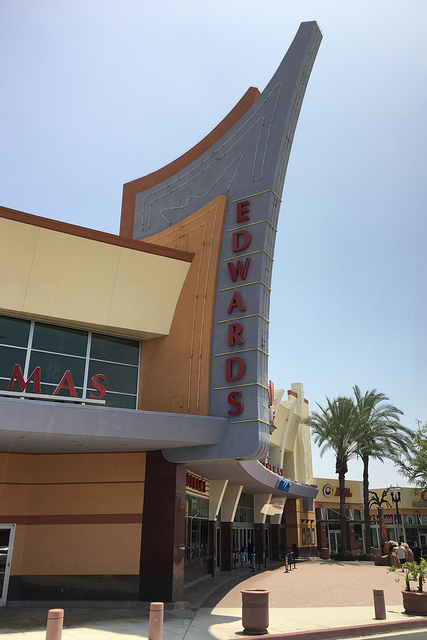 Opened in November 15, 2002, this megaplex was designed by Blair Ballard Architects of Laguna Beach, California, in what might one day be known as the Edwards-Googie style of architecture. Part of a major downtown redevelopment in this aging suburb eight miles east of downtown Los Angeles, it is the newer and larger of two Edwards-built megaplexes in the city of Alhambra.

The Edwards company has had a long association with Alhambra, going back to the 1930’s, and at one time it operated all four of the city’s single screen theatres (all now demolished.)

The two largest auditoriums of the Alhambra Renaissance each have 400 seats, and four other auditoriums each have 300 seats. All auditoriums in the complex feature stadium seating.

This page has been up for about ten years now and it only has two comments. Does nobody go to movies in Alhambra anymore? It hardly seems worth my effort to have submitted it.

In any case, there has been a change at the theater and it is now Edwards Alhambra Renaissance 14 & IMAX. It doesn’t look like there’s been any expansion of the building, so the original interior must have been reconfigured, probably with one of the 400-seat auditoriums converted for IMAX, and maybe another one split to add another screen. Or is the IMAX counted as one of the 14 screens? Since nobody who has been to this theater since 2008 has seen fit to comment, maybe we’ll never know.