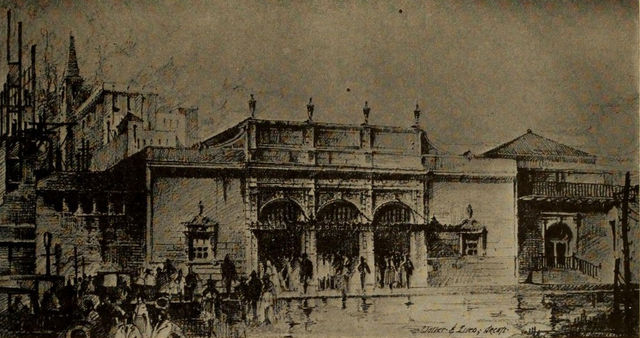 The El Rey Theatre was damaged in a earthquake, and was later razed in the 1980’s.

great theatre i saw scarface and other great film i miss this theatre.

Nice looking Marquee at the ElRay.

First things First,when “Frankenstien” played here it was rated X,so they must have gotten an edited version. Marquee is good like Tlsloews said,But I wouldn’t have the ratings “R” and “PG” so large.

The marquee Mike and tlsloews admire was installed in the early 1960s, after the Edwards circuit took over operation from Fox West Coast, who had at that time operated the house for well over a decade. Edwards had operated the El Rey for a while earlier, too, under an arrangement with leaseholder Fox.

The 1951 USC photo ken mc linked to above has been moved and is now here. It gives only a glimpse of the side of the older marquee, a boxy, neon affair probably installed in the 1930s. The original, triple-arched entrance of the Temple Theatre, seen in the photo at the top of this page, was long gone by the time I first saw the place.

The architects of the Temple were Walker & Eisen, by the way, as noted in Southwest Builder & Contractor of June 4, 1921. The Temple opened in December, 1921.

the El Rey wasn’t demolished until around 1990 if memory serves me correct. I remember the owner exhausted every avenue to try to keep it. Demolishing it was the last resort. I remember they used to have dollar Wednesdays and double Features.

This was apparently the second model B that Wurlitzer built.

According to this opus list, the status of the organ is “XX” or unknown.

Does anybody know what happened to this organ (or its parts)?

It doesn’t appear to be mentioned at all in the above-quoted pre-demolition article, making me think that it had already been removed by that time.

Andrew: I don’t recall having seen an organ console in the El Rey when I attended movies there at least a dozen times in the late 1950s and early 1960s. But then I don’t think I ever attended the El Rey prior to the installation of the CinemaScope screen in 1954. The screen was quite wide, and if the organ hadn’t been removed earlier it was probably taken out when the screen was installed.

The only old house in the San Gabriel Valley that I know for certain still had an organ in the 1960s was the Rialto in South Pasadena. I believe it’s still there, but it hasn’t been used since being damaged in a fire in the 1970s.

I clearly remember going to El Rey . All the Friday the 13th movies would show at the El Rey
I saw these movies at El Rey
The Buddy Holly Story
Roller Boogie
The Black Hole
I know I went there a few more times . It was across the street from Pedrini Music