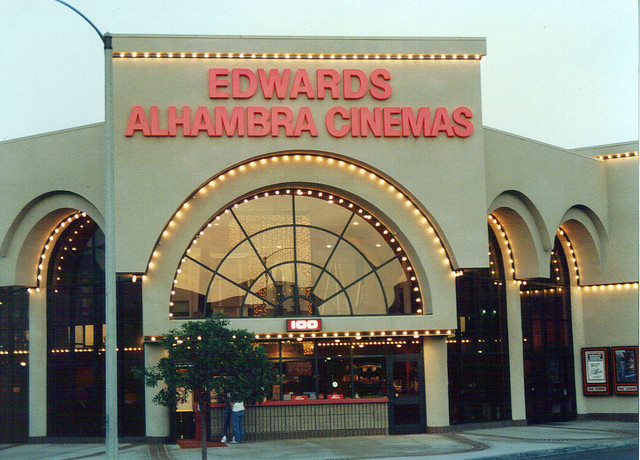 The Edwards Alhambra Palace was opened on May 24, 1985. This place used to be there. But since the opening of Edwards Renaissance 14, it’s a decision to close and demolish Alhambra Place. Now there’s no building anymore, just an empty area available for rental, lease, or sale, upon which housing was built.

I believe the Alhambra Place was built in 1986. The main theater was equipped with 70mm equipment.

The opening day of the Edwards Alhambra Place Cinemas was May 24th, 1985, according to the ad displayed at the Making Movies web site.

A senior housing project is being built on the site of the Alhambra Place.

I saw many movies here as a kid before they opened the Atlantic Palace in the late 80’s.

I worked at this theater around 1988-1990. A fun first job, most of the staff were high school students from AHS and SGHS. Was one of the busiest in the Edwards circuit at the time, great location with shopping and a Black Angus right across the street. Movies that had poor attendance at the Monterey Mall 3plex or the Temple City 4plex usually did well if they got transferred to Alhambra Place.

Popcorn was the best tasting I’ve ever had (was popped in coconut oil & served with real butter). Lobby was a symmetrical and functional design in the NW corner of the rectangular building, box office and concessions were back to back. Staircases at each end of the lobby led up to video games, restrooms, & had windows for the public to see some of the projection equipment.

All 5 auditoriums featured Dolby surround sound and were nicely proportioned but not very decorative: simple red drapes covering the walls, red screen curtains that were raised vertically to the ceiling, recessed ceiling lights aimed at the sidewalls for intermission lighting and white tivoli lights for aisle lighting.

Auditorium #1 seated 500+, had a 50' wide screen, and had a simplex 35/70mm projector head (we never did show a 70mm print while I was there tho). Auditoriums #2-#5 had Century 35mm projector heads. #1, #2, #5 had motorized masking for showing flat or cinemascope prints. All 5 projection systems had Christie lamphouses, automation, & platter systems.

When I moved to LA in 1986, I saw my first movie at this theater. It was Touch and Go with Michael Keaton and I ate at the Black Angus before the show. I always wondered what happened to it as I moved into LA proper and never got back to see another film here. I remember it as being a standard theater, that was clean, well run etc.

the theatre is gone and replaced by town houses.

i saw the orginal batman there.

thanks Joe for opening day ad.

Good memories of this theater. I used to go to this theater with friends. We would theater hop. The owner looked the other way. One day I talked to him about it and he said he would rather see us in the theater then out on the streets getting into trouble. I saw Aliens here and Batman, Full Metal Jacket, Beetljuice and a lot of other movies. The last two movies I saw here were Scream 2 and Snatch.