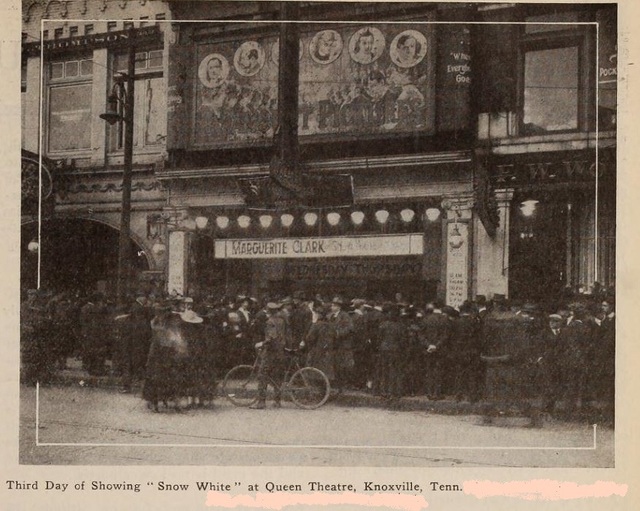 The Queen Theatre appears in a c.1920 postcard on the west side of Knoxville’s main downtown thoroughfare, S. Gay Street. It is along side, and farther south than the still-standing Strand Theatre at 415 S. Gay Street. It appears to be almost directly opposite the Riviera Theater (q.v.). No other information available.

In the weeks preceding the opening, several newspaper articles describe the building in glowing terms. (Except for one postcard, no photos have yet surfaced as of this writing).

The Knoxville Journal Tribune for Tuesday July 7, 1914 -opening day- says:
“A large force of men worked all night last night putting the finishing touches on the new Queen Theatre which opens this afternoon at 2 o'clock. The brilliant electric sign with its revolving crown and the dazzling illumination of the front, which were tested out last evening, caused everyone passing down Gay Street to stop and look.”

The following day, the Journal Tribune said “The theater is uniquely and tastefully arranged. Unlike other theaters in Knoxville, and the usual plan of theaters generally, the Queen is arranged so that the audience faces the entrance. Instead of the picture screen being at the rear of the building, it is in the front, and the patrons pass to the rear to take their seats. This arrangement is an original idea of manger G.W. Shorey’s and has proven successful wherever it has been tried. It gives a larger seating space and additional exits…

“The theatre is equipped with the latest cooling plant, and many electric fans send out cooling air over ice blocks in the cooling plant. The rear wall is also cut into apartments, through which fresh air is brought into the building.

“The eight hundred seats on the first floor and on the mezzanine floor are comfortable, and are placed far enough apart for every one to have ample room.

“The walls of the building are lined with handsome columns, and on the walls hang mirrows (sic) and handsome paintings…”

Sadly, except for one mention of “preparing the music” I have found nothing to indicate who provided the music or on what sort of instrument. Surely there was more than a piano, but there is no record of a pipe organ or photoplayer installed here.

There were, at the time, two legitimate theatres in Knoxville, the Bijou and the Staub (later known as the Lyric q.v.) and three nickelodeons, the Rex, the Majestic and the Gay. The Queen seems to have been the first in the series of purpose-built movie theatres that would each attempt to surpass the previous ones in grandure and opulance. This culminated in 1928 with the opening of Paramount Publix’s magnificent Tennessee Theatre.

The audience-facing-the-entrance design is something I’ve seen only twice elsewhere: the Old Daisy Theatre in Memphis, Tennessee and the First Baptist Church, Bowling Green Kentucky (since re-configured). I can’t image what they were thinking, as any movement at the auditorium front is an immediate distraction. With the stiff competition the Queen faced in later years from the Strand, the Riviera and the Tennessee, this might have contributed to its very short life – I have found no mention of the Queen Theatre after the Great Depression.

And of course, it really should be noted what a pity it is that this hall didn’t survive. If for no other reason, how many towns could boast of having a Queen Theatre on Gay Street?

I was told by the older projectionist about how the Queen was reversed and you entered the auditorium from behind the screen. I wish there were pictures of the interior.

Publix closed the Queen on September 29, 1928 only two days before they opened the Tennessee Theatre across the street in the next block.

I remember being in one theatre in New York City in the early 60’s that you entered the auditorium from behind the screen. I don’t remember the name of the theatre, but it was fairly large, had a balcony, and was showing West Side Story 24 hours a day.

Tim, do I remember correctly that Knoxville’s Bijou was also closed (temporarily)when the Tennessee opened? Was the Bijou also controlled by Paramount-Publix at the time? How many other halls closed in the wake of the Tennessee’s opening? Publix all but had a monopoly on the theatres in Knoxville didn’t they?

Mr. C.B. Atkins sold the Bijou to a Mr. Sherman in 1926 with the stipulation that the property would not be used for theatrical presentations for a period of five years. Mr. Atkins had an interest in Tennessee Enterprise which included all of the Publixâ€™s theatres in Knoxville. They had plans to build a large movie palace at this time, and wanted to make sure to limit competition. Of course that movie palace was the Tennessee that opened in 1928.

They did not completely shut down competition since Mr. Booth opened his Booth Theatre in mid September of 1928, just two weeks before the Tennessee opened.

Distance shot of the front can be found here:
View link
Zoom the picture out and you can see the Riviera across the street.

You guys seem to know Knoxville . I have a Knoxville Newspaper with the movie ads I found in a relative’s house. Oct 20 1964 THE LENOX THEATRE.I submitted it to CT,but can’t find it; is this a theatre that got a name change.The address is so small it looks like Broadway St or Road or Ave,? Thanks.

Tim, Replying to your post on July 31 2010. Notice on the link, the film at the Riviera is “The Bedroom Window” which IMDB lists as opened in June 1924 starring May McAvoy and Malcolm McGregor. Showing at the Queen is the 1923 western “The Fighting Strain” staring Neal Hart, written by Neal Hart, directed by Neal Hart, titles by Neal Hart, executive producer was (3 guesses!) Neal Hart.