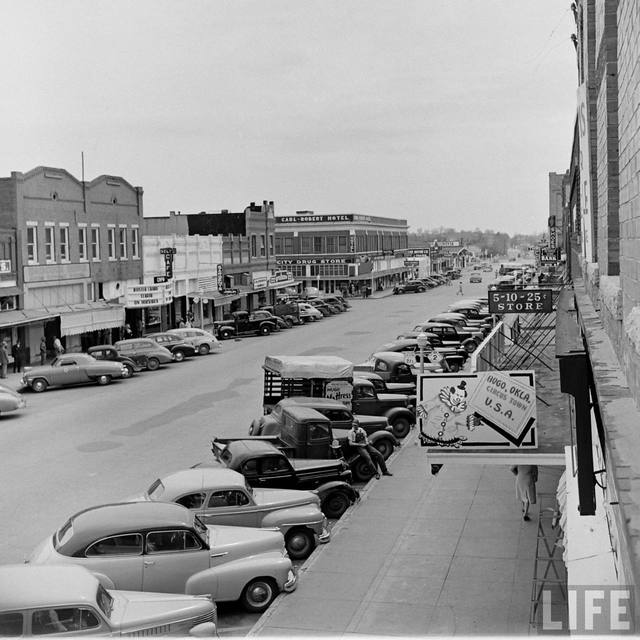 The 301-seat Broadway Theatre was opened on January 25, 1912. Later renamed Hugo Theatre. On November 21, 1934 it was renamed Ritz Theatre having been enlarged. Primarily a venue for B-Westerns and similar films, the Ritz Theatre was owned and operated by the Oklahoma City based multi-theatre operator Griffith Amusement Co., which was later known as Video Independent Theatres, Inc. Locals will remember the location of the Ritz Theatre as Ralph’s Barber Shop until several years ago. Just recently the frame of the screen was removed during building remodeling. Although it was the only part of the theatre to survive, it had continued to exist since the theatre closed in the mid-1950’s.

Below can be found vintage exterior and interior photographs of the Ritz Theatre. Type in word “ritz” to view images …
View link

Hugo was once known as Circus City, U.S.A, since it was headquarters to five different circuses.
In this small town is a most unique cemetery called Showmens Rest, final resting place for many a circus performer. These sites tell more –
http://www.roadsideamerica.com/story/10433
and,
View link

In this LIFE 1946 image the Ritz can be spotted in far background;
View link

Talk about an “Old West” style movie house, the Ritz was it, as these antique pictures reveal;
http://www.roadsideoklahoma.com/node/405

Just added the 1946 LIFE Magazine photo with Buster Crabbe’s “Terrors On Horseback” on the Ritz marquee. The front parapet wall has been removed in the current photos.

In the 1914-1915 American Motion Picture Directory, 110 N. Broadway is listed as the address of the Broadway Theatre. The Broadway is also listed, though with no addess given, in the 1914 edition of Gus Hill’s National Theatrical Directory. It was then a 10 cent house operated by O. Gill, subscribed to the General Film Service, and seated 301.

Ad for the name change November 21, 1934 from the Hugo to the Ritz is posted with Barbara Stanwyck in “The Gambling Lady.”