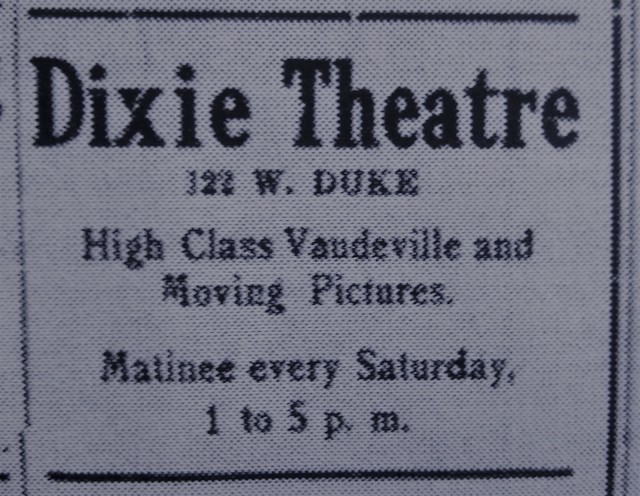 The first Dixie Theatre in Hugo opened in 1909 and has its own page on Cinema Treasures.

The second Dixie Theatre to operate in Hugo was opened on December 31, 1946 with Jane Wyman in “Make Your Own Bed”. Originally independently owned and operated it was sold to the Griffith Amusement Company in July 1947. In 1949 it was sold to the Oklahoma City based Video Independent Theatres, Inc., owner and operator of three other theatres (the Erie Theatre, the Ritz Theatre, and the Circus Drive-In) in Hugo at that time.

Listed in the 1950 edition of Film Daily Yearbook with a seating capacity of 450.

Presented below are snapshots of Hugo’s Dixie Theatre …
View link
and,
View link

One fascinating fact is that Hugo used to be called Cicus City, U.S.A., because it was headquarters to five different circuses.
This interesting site tells about Showmens Rest, a cemetery for circus performers –
http://www.roadsideamerica.com/story/10433

There was a nickelodeon in Hugo called the Dixie, opened in 1909 by Mr. and Mrs. Henry Fickensher. There was an article about the Fickenshers in the June 30, 1956, issue of Boxoffice Magazine, which said they sold the Dixie in 1910 and moved to Frederick, Oklahoma, to operate the Gem and Airdome theaters.

This is a photo of the Dixie taken long after it had closed (the same as one of the photos in the now-dead link posted by Okie Medley above.)

I’m not sure if this nickelodeon was the same theater mentioned in the October 6, 1946, issue of Boxoffice which said: “C.L. Walker and L. McMillan are opening the Dixie Theatre at Hugo on November 17. This will be a second-run house and will seat about 500 persons.” The building in the photo doesn’t look big enough to have held 500 seats (though the figure might be a Boxoffice exaggeration) nor does it look as though it had been remodeled in the 1940s, as it probably would have been had it been reopened then. I’d guess there were two Dixie theaters in Hugo, and the photo depicts the silent era house.

A Dixie Theatre at 120 Duke Street is one of five theaters listed at Hugo in the 1914-1915 American Motion Picture Directory. The Dixie is also one of two movie houses listed at Hugo in the 1914 edition of Gus Hill’s National Theatrical Directory, but with no address given. It was managed by O. Hill, charged 10 cents admission, subscribed to the Universal service, and had a capacity of 288.

Messy? The history of the Dixie was not well documented down through the years. Please provide needed information if you can alleviate the mess.

There were two Dixie Theatres - unrelated except in vicinity so two entries needed - one for the silent era and one for the post-War sound era. This can be the “new” / sound era Dixie Theatre. WWII veterans, Raymond McMillan and Clyde Walker, launched the New Dixie Theatre in the former Northeast Texas Motor Lines Inc. depot on with Jane Wyman in “Make Your Own Bed” on December 31, 1946.

It was the second Dixie Theatre in the general area as there was an unrelated Dixie Theatre in the silent era in the the same area. Just six months later in July of 1947, Griffith Consolidated Theatres Inc. Circuit bought out this location to eliminate the new competition as they operated the Erie in Ritz in downtown Hugo. They downgraded the venue to weekend-only operation.

In December of 1949, Video Independent Theatres Circuit took on the Griffith Amusement portfolio. They dropped the Dixie at the end of 1952 with “Hit the Ice” and “Border Saddlemasters.” The venue was used for agricultural trade screenings and meetings in 1953 before being repurposed.