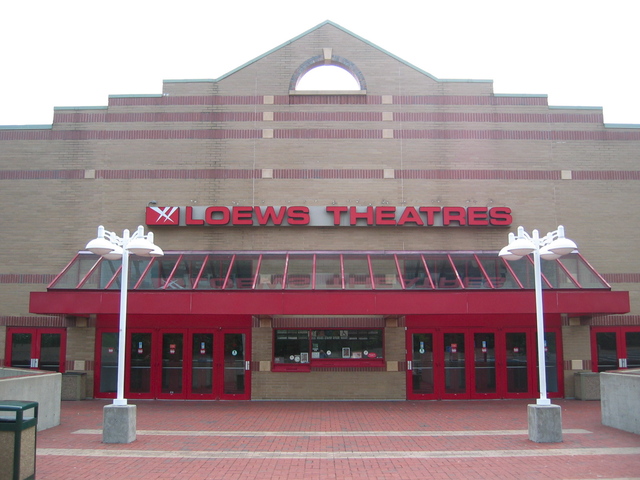 This six screen multiplex opened on November 19, 1993 as part of the expansion of the busy Bay Terrace shopping Center in the northeastern Queens neighborhood of Bayside. It was intended as a replacement for the two screen (originally a single screener) Loews Bay Terrace Theater, a free standing theater opened in the early-1960’s at the corner of 26th Avenue and Bell Boulevard just a few hundred feet to the east. As part of the shopping center expansion, the older theater was converted to retail space and currently houses the chain restaurant Applebee’s and a Victoria’s Secret women’s apparel store.

The new 1,164-seat theater was built on some seven acres of vacant land along the western edge of the shopping center that had previously been speculated at various times for condominium and town house development. The structure is actually two stories high, with single story wings built in a U-shaped configuration facing the shopping center. The lower floor is occupied by a variety of shops and eating establishments, representing at the time an increase of 67,000 square feet of retail space for the center. The theater is located in the upper portion of the building and faces its own separate parking lot away from the center. Due to the natural grade in the landscape, the theater’s parking lot allows for convenient entry at the second floor level. Patrons actually traverse a short foot bridge from the parking area that spans the loading bay access area for the retail shops on the lower level.

The two-window box office is located flush along the exterior wall of the theater with entrance doors on either side. The doors lead into an atrium lobby that feels a little smaller than it actually is due to the large circular candy counter that occupies most of the space. There are coming attraction display cases against either wall of the lobby along with a couple of small benches and video games for ticket holder convenience. Facing the lobby along the back wall are the rest rooms, which are along the foyer that runs the length of the building and leads to three auditoriums in either direction. Posters from older movies (older as in the 1980’s and 1990’s) line the foyer walls.

The ticket taker is usually stationed at the mid-point of the wide threshold from the lobby into the foyer, with the rest of the entryway cordoned off to ensure only ticket holders are permitted. Of course, this means you have to negotiate with the ticket-taker if you need to make a bathroom trip before your theater is ready for seating. The auditoriums are layed out symmetrically, with the two largest screens (302 seats each) at the far end of the foyer and the smaller rooms (140 seats) more towards the center. It’s been a while since I attended, but I don’t recall that any of the theaters feature stadium style seating, though the rocking chairs are quite comfortable. None of these rooms were constructed for 70mm presentation (since the format was well into its death throes at the time the multiplex was conceived) nor do I think there has been any digital installation.

Interestingly, as with the original 1960’s Bay Terrace Theater, Loews is a tenant in the building, rather than an owner all buildings in the shopping center are owned by Cord Meyer Development, the company that first opened the mall in 1960. The entire expansion project including the new theater was budgeted at $20 million when it was announced in May of 1992. I found the original article online at the NY Times website, along with a related article from 1994 about the rising cost of admissions. At the time, Manhattan theaters topped out at $8 for adults, while tickets at the Loews Bay Terrace Sixplex had risen 50 cents to $7.50 as of May 1994.

Adult ticket prices are currently $9.50 with discounts to $7.50 available Monday and Thursday until 6PM and Friday and Sunday (plus Holidays) until 4PM.

Theater reopens tomorrow evening. Norm of the North opens there. There are 2 rejects from Fresh Meadows,Concussion and Joy plus 3 films that played here before, Brooklyn, Spotlight and the Big Short, perfect I guess after the Academy Award nominations. It looks per Fandango’s listing that only 5 screens are playing at the moment. The films have later showings during the week, more on par with the summer and holidays. I think their schedules will resemble last year, smaller releases and older films. It will look more packed though.

Actually now per AMC’s website the 6th screen is move over of The Hatefull Eight.

Theater 1 appears to be the big seating screen with 105. I’d swear screens 1 & 6 used to have the same seating capacity before the renovation.

I’d like to know why whenever I receive an e-mail that someone has responded to a comment I’ve made about this theater I find only my comments listed here.

They’ve gone live on reserved seating now. I went with my wife there today, booked through Fandango. Anyway one woman went to the window and was told to pick out her seat she said not this here too, asked for her money back and then said she wouldn’t come to this theater anymore.

Please update, total seats 378. It was reduced about 4 years ago.