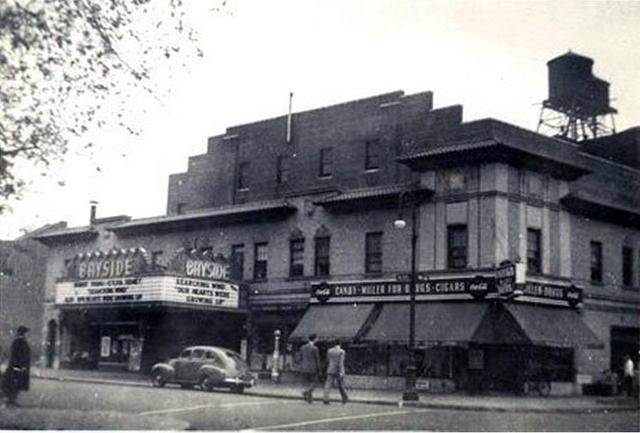 Another United Artists house run into the ground and then closed. The original theatre had a small lobby but when it was quaded in the 1970’s, UA gutted one of the stores and gave it a modern glass front and tripled the lobby size. Even though Loews built the Bay Terrace 7 nearby there was ample product for the Bayside to play.

The theater became so run down and was falling apart that few attended it anymore. Instead of renovating and adding screens UA once again closed another once great house and gutted it to make stores.

That should be Columbus Day October 8.

Look at that… More than two years after hashing out the address of this theatre with Warren and Lost Memory, the info up top still needs to be updated! Bryan… If you’re out there… We should change the address for this one to 38-39 Bell Boulevard.

Just came across this thread.
I grew up in Bayside in the 1950’s and was one of those youngsters who enjoyed watching movies and buying popcorn and Jujubes at the candy counter at Skouras' Bayside Theater.
I recall being frightened out of my whits and having nightmares after seeing ‘The Blob’ there in the late 1950’s.
Back then the theater featured matrons with uniforms and flashlights, and they’d guide one to seats when the theater was crowded and sternly patrol the aisles to tell noisy kids to be quiet.
From about 1964 til 1968 I worked as an office boy at The Bayside Times when the weekly newspaper was owned by Publisher Christine Allison and was located in a storefront on 41st Avenue a few doors off Bell Blvd. next door to a photography studio.
Since I was on Bell Blvd. a lot as a teenager and at crazy hours day and night, I happened one afternoon or evening (not sure) to stop by The Bayside Theater after a show.
Testing the door, I found it to be unlocked and I entered the lobby and theater and saw that it was being given a rudimentary cleaning in preparation for the next performance.
I recall there was a large high-wattage incandescent bulb on a tall pole stationed in one of the aisles to illuminate the theater and to help the clean-up guy see what was on the floors between the seats.
Saying hi, I probably told the clean-up guy that I worked at The Bayside Times and that the movie theater had always been a part of my growing up in Bayside.
It was my good fortune that day/night that the guy offered me a tour backstage.
I recall seeing a 1920’s-era electrical panel board with all sorts of dials and dimmer switches.
I followed the guy down a stairs to an area beneath the stage and saw massive beams underpinning the entire stage area and was told that the theater had once featured vaudeville acts and that elephants had even performed on that stage.
One of the keepsakes from that theater tour was a wonderful old lobby card which I still have to this day, preserved and framed, hanging on the wall in the family summer home.
It is printed on heavy card stock and proudly proclaims ‘Irving M. Lessers’ Capitol Theater'.
A number of films are advertised as being scheduled for that week, in runs lasting just a few days each.
The card isn’t in front of me right now (I live in the Washington DC metro area) so I’m not sure of the exact month and week of the movie schedule displayed on that card, but I think it’s from sometime late in 1927 and displays the films, their showdates, and times.
The movies leading that week’s bill were ‘What Price Glory’ with Victor McLaglen, Edmund Lowe, and Dolores del Rio (release date: November 23, 1926, according to IMDB.com); and ‘Tell It to Sweeney’ with Chester Conklin and George Bancroft (release date: September 24, 1927, according to IMDB).
This lobby card also displays the theater address and phone number (back then phone numbers were just six digits: ‘BAyside XXXX’).
As soon as I get around to it, I’ll post all the exact details on the card along with a photo of the card.
In a comment above posted 9/22/2006 by Warren G. Harris, he states that the opening date for the theater was October 11, 1927.
Given that ‘Tell It to Sweeney’ was released just three weeks earlier on September 24, 1927, and given that this lobby card appears to be of that same period, it means Bayside Theater was indeed running some first-run movie fare, at least in the theater’s opening months.

Oh, and by the way, during at least the 1950’s, the corner store, where the Washington Mutual bank is now, used to be Miller’s Pharmacy, a wonderful apothecary run by an older gentleman of the same name, the type of drug store that signified its profession by displaying large glass globes filled with colored water, much the same way barbers used to display their profession via barber poles.

Here is a link to a photograph of a lobby card (mentioned above) from Irving M. Lesser’s ‘Capitol Theatre’ in Bayside, New York, for the week of Mon. Dec. 12 through Sun. Dec. 18, 1927.
SEE:
http://www.berkshirerecord.com/baysidetheatre.html

I hope this link works. I uploaded a photo of the Capitol Theater, which became the Bayside. According to the marque, it must have been just prior to it’s opening.

Uploaded a picture of the Capitol from Forgotten NY