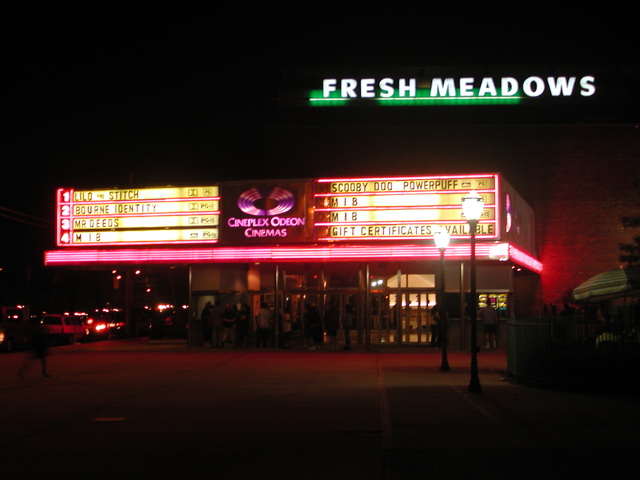 This large theatre, which sits along the Long Island Expressway, began its life on November 23, 1949. It was a giant 2,184-seat suburban movie palace serving a 3,000-family, middle income housing project in Fresh Meadows, Queens, New York.

It was constructed by the firm of Voorhies, Walker, Foley & Smith and was built for Century Circuit Inc. which had the automobile in mind when it constructed an adjoining parking lot with space for 1,000 cars.

The theatre itself contained an enormous auditorium with a balcony, a large lobby and foyer, and a lounge in the theatre’s mezzanine.

The modern opulence of the Meadows, and its late-1940’s stylings, have been lost over the years, beginning on March 16, 1979 when it was twinned. As the former Century Theatres movie house has slowly morphed into a seven-screen multiplex operated by Cineplex Odeon on May 27, 1988.

Now operated by AMC Theatres, the ghost of its former operators, Cineplex Odeon, can still be seen in the theatre’s marquee.

The AMC Loews Fresh Meadows 7, became known as AMC Fresh Meadows 7 is located near a five-screen Loews theatre on the other side of the Long Island Expressway that recently closed. In the fall of 2019, following the installation of larger seats, the total seating capacity has been reduced to 633.

Please update, Went to 7 screens on May 27, 1988 under Cineplex Odeon. AMC added recliners a few years ago and the only IMAX theatre that not stadium seating.

The largest single-screen cinema built in the NYC borough of Queens after the end of WW2 will be 70 years old in November of this year. Many photos taken by patrons of the current multiplex can be viewed here

Even with its original 2,200 seats, it was hardly “giant” sized or even a “movie palace” in the sense of grandiose cinemas built in the 1920s into the early 1930s. And the free parking facilities were shared with the entire shopping complex, and not restricted to theatre patrons.

2,200 for a single screen theater built on Long Island after World War II was a big thing. A number of Hollywood stars were there for the opening. I remember seeing the newsreel of the opening that Century showed in it’s theaters after the event.

The seat reduction was in either 2013 or 2014, that was one of AMC Recliner theatres.

Uploaded cover from Box Office Magazine showing the opening of Century’s Meadows as the lead story.