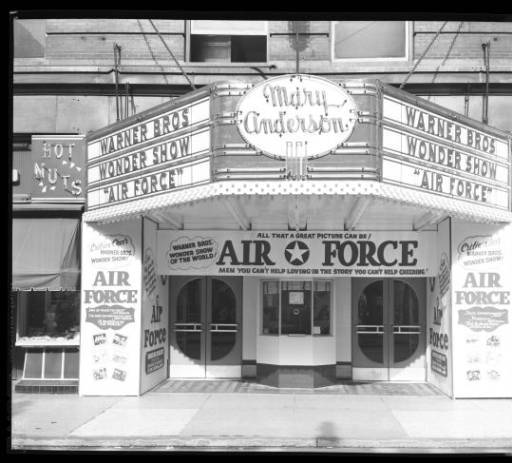 The Mary Anderson Theatre was the oldest theatre on Louisville’s 4th Street. Originally opened April 1, 1907 as a vaudeville house, it was converted to film sometime in the 1920’s. The theatre closed in the early-1970’s and has been converted into office space. The theatre was named for actress Mary Anderson who made her stage debut in this city.

I remember seeing “Cleopatra” in the upstairs “Penthouse” at the United Artists (now Palace) Theatre. What a theatre street 4th Street was back in the 60s!

At any rate just remember that this theater was named after Mary Anderson, the stage actress from the Louisville area. Is the Mary Anderson Theater Building now called the Mary Anderson Office Building? If it’s not it seems like it should be! Pehaps a movement should be started for that to happen. Is a plaque on the building to commemorate the theater?

Anyone know what happened to that Mighty WurliTzer Theater Pipe Organ when it went to New York, New York? If you know anything about the organ, please email us!

A list of theaters in the Orpheum vaudeville circuit published in 1917 included the Mary Anderson Theatre, with the note that the house was also affiliated with the B.F. Keith circuit.

A 1906 publication lists the Mary Anderson Theatre as being operated by the Shuberts, so it was probably a legitimate house at that time.

I have a postcard showing a theater on Fourth Street (north from Broadway). Matching the windows on this building and identifying the building on the corner of Chestnut Street (still existing), this is probably the Mary Anderson. This card only shows a partial view of the marquee, but there is a large sign that advertises B.F. KEITH’S VAUDEVILLE.

Ad for the April 15th, 1949 reopening after renovations in photo section.

Opened with an invitational show on April 1, 1907 in the Atherton Office Building, the 1906 architectural exterior drawing in photos. But then a period of delay found Peter Lee Atherton’s United States Amusement closed to work on contracts and opened to the public September 2, 1907.

The Mary Anderson Theatre was converted back into a performance space at some point (I think in the late 1970s) and was used for shows by the Christian Workshop Theatre. I appeared in a CWT production of “West Side Story” there in 1982.

I too was in a play around 1978 at the Mary Anderson as part of the Christian Workshop Theatre. It was called “A Sleep of Prisoners”.