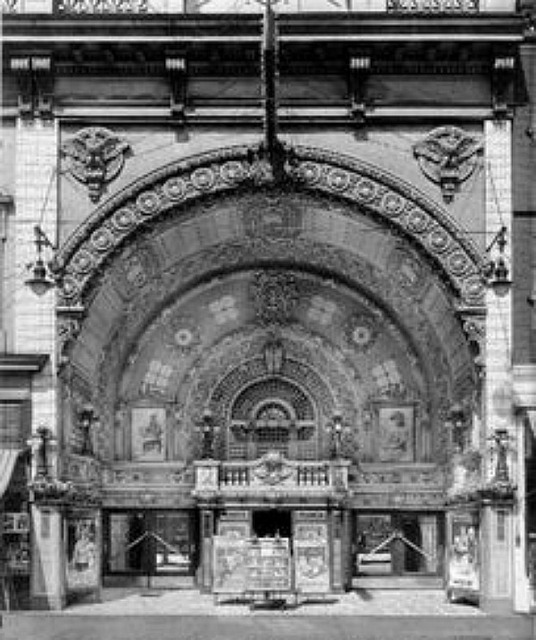 There are also two addresses given for the Majestic Theater. The other address given is 544 South 4th Street. Regardless of which version of the Majestic history is accurate, this Majestic Theater operated from at least 1912 (possibly 1908) until around 1928 when the building was demolished.

Still looking for the “lost” MAJESTIC theatre from the MARY TYLER MOORE production THE POPCORN KID A short lived TV SERIES in the late 80’S that took place in a downtown movie theatre.AM I THE ONLY PERSON TO HAVE SEEN THIS SHOW?

Here is a view of the Majestic Theatre’s auditorium, from an ad in the Catalogue of the First Exhibition of the Louisville chapter of the American Institute of Architects, 1912.

A very similar view is here, illustrating an article about the Majestic’s lighting which was published in the August 10, 1912, issue of the trade journal Electrical Review and Western Electrician.

The most thorough history of the Majestic’s early years can be read in this article from The Moving Picture World of March 4, 1916. It reveals that the original 650-seat theater, opened in 1908, continued to operate during most of the part of 1911 when a new 1,200-seat theater was built over and around it, only closing for three weeks during which the old building was dismantled and carried out of the new building piece by piece. In 1915, a new, more ornate entrance was created for the theater. There is a photo of it, as well as another photo of the auditorium.

What an elegant entrance design for the Majestic. Any interior pics?