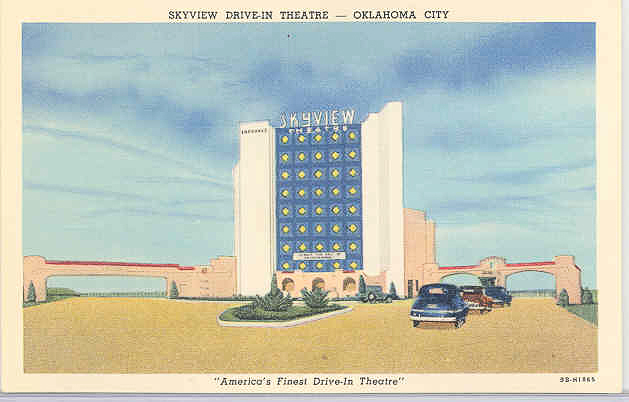 The Skyview Outdoor Drive-In was opened June 12, 1948 with Franchot Tone in “I Love Trouble”.

Didn’t #@*# work. Dadgummit, try this one instead –
View link

Was the location for the Skyview on the northeast corner of Coltrane and NE 23rd? From an aerial view it looks very much like it. But, if you enter 1133 NE 23 on Mapquest, it puts the location way back west near Kelley. I’ve also seen a map that places it off Sunnylane…? Thanks!

The old Skyview Drive-In has returned to wilderness country,
http://www.roadsideoklahoma.com/node/153

Krcrook asks about the location of the Skyview. It was NOT located on 66. It was located on 23rd street, East of central Oklahoma city. It is actually state highway 62.

The Skyview closed at the end of the 1983 and did not reopen for the 84 season.

1979 IMPA, does not list capacity. Owner given as C. Caporl

Above address in the header is incorrect. Approx. address for this drive-in was 2788 N Coltrane Rd, Oklahoma City, OK 73121.

I grew up across the street from this theater. Skyview sat on the NE corner of 23rd and Coltrane. I lived on the SE side of the intersection behind a few run-down corner stores in a old run-down neighborhood called Garden Days. It the poor side of the street.

Right behind Skyview on the north side of 23rd is Forest Park. Coltrane runs right through it. A nice neighborhood with big homes. The population in this entire area is about 95% African-Amercian, so the only people that really catered to Skyview before it was shut down was mainly African-American.

When I was old enough to drive (1977) I would take my Volkswagon Bug to Skyview on Wednesday night. Wednesdays was $1 per car night. We would squeeze as many people in my bug as we would and pay $1 to see 3 movies. It was good times. The fun was incredible. Of course you’d see about 20 to 30 cars that night, but what seemed like hundreds of people running around outside or sitting outside watching the movie.

I was eventually over-taken by mothernature and torn down in the late 90’s I believe. I’m not sure when. Something was put there for awhile admist all the trees. I never knew what it was, but it to has been claimed by the land.

This theater was a big part of my early life. Even when I pass by that spot today, my eyes water up at the great history I had there.

A church is located here now. As far as I can tell, there are just a few speaker poles left of this theater plus defined arch of the original car rows. But look behind the church and they left the pole there for posterity. 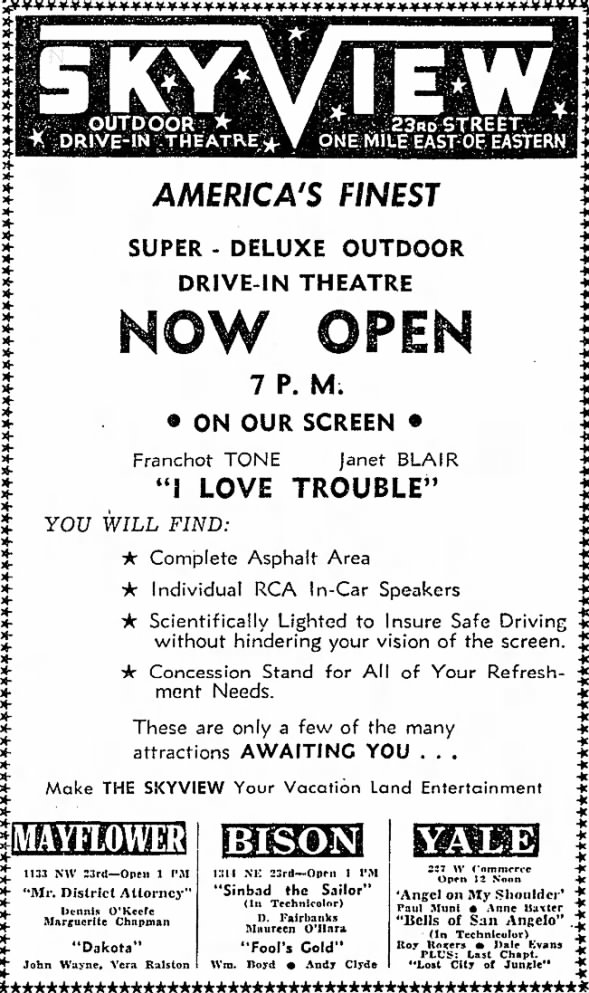 Getting in a bit late on the conversation, but having grown up in Midwest City I thought I would add that the Skyview was one of our go-to drive-ins in high school in the 1960s. It was at 23rd and Coltrane. The size of the site reached the 2700 block of Coltrane, so therein may be the source of contradiction on the address. The grounds are still clearly visible on Google aerials.

The Skyview was almost exactly 3½ miles from Route 66, but Quinta Scott included a nice B&W photo from 1981 in her 2000 book, “Along Route 66.” (Highly recommended for 66 fans!) She included the following notes, based on a 1998 interview with Christopher Caporal:

Sam Kapriolotis landed in New York with his father and brother at the turn of the century. For two years, the family made their living selling fruit and gum from a pushcart on New York streets. Then, when Sam’s father and brother returned to their native Greece, nine-year-old Sam stayed. He raised himself, became a citizen, and took a new name - Caporal, the name of his favorite smoke. Young Sam Caporal drifted to St. Louis, where he learned to be a movie projectionist, and then to Oklahoma City, where he opened his first movie house in 1916. In 1948, Sam and his sons - George, Chris, and Pete - built the Skyview Drive-In.

… The Caporals … hired architect David Baldwin to design the Skyview … Baldwin gave them a reinforced-concrete, Spanish Colonial screen tower. The contractor used slip-form construction to build the tower. The process, the same that had been used in the construction of grain elevators since the turn of the century, took six days. The workers started on the ground, filled the forms with concrete, let it set, moved the forms up a bit, and poured more concrete. It was a twenty-four-hour-a-day operation. As the tower moved upward, workers installed prefabricated windows, shaped like quatrefoils and glazed with opaque glass, in the center section of the screen tower. The Caporals painted the piers white and the center royal blue and outlined the whole in neon. They installed lights behind the quatrefoil windows so that at night they glowed like large golden stars. The set SKYVIEW on top in giant neon letters and proudly placed their came, CAPORAL, on the top of the left pier.