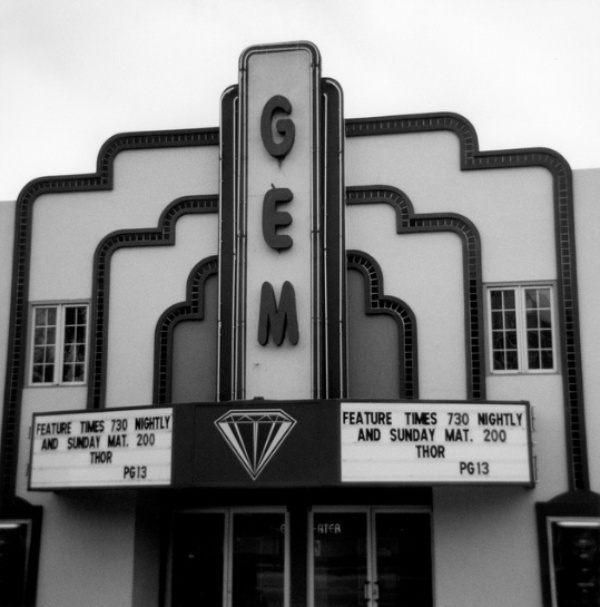 Opened in 1939, the Gem Theater was built in what was once a feed store. Simply decorated seating about 250 patrons, the Gem Theater burned to the ground on December 7, 1941, Pearl Harbor Day, along with much of the rest of the block.

Less than half a year later, the Gem Theater was rebuilt, more stylish than before, in the Art Deco style, complete with its landmark vertical marquee, spelling out the name of the theater in neon-lit lettering. In the theater’s early days, a large fan was placed in the front of the theater, towards the audience, but in 1949, it became the first public building in the town with air-conditioning, making the Gem Theater a very popular destination for entire families during the summer months.

As the town’s only theater, the Gem Theater never lost its popularity, until a new modern theater was built in town in the early-1980’s. By 1984, the Gem Theater had finally shown its last movie, though it soon reopened as a live country music theater, the Sugar Loaf Opry, which lasted about half a decade.

Afterwards, the Gem Theater fell into serious disrepair, but in 1995, before it could be razed, a group stepped in to save the Gem Theater, which held so many great memories for so many Heber Springs residents. Though the interior was entirely rebuilt, in a style that complemented the Art Deco facade, the exterior was restored and relit, looking very similar to its 1940’s appearance.

An adjacent store was gutted and transformed into dressing rooms and an extension of the original lobby space. Its formerly small stage was enlarged to 30 feet deep and 33 feet wide, and state of the art light and sound systems were installed. In the lobby annex is an art gallery with revolving exhibits, which have become as popular as the stage shows and concerts which now draw crowds to the Gem Community Theater once more.