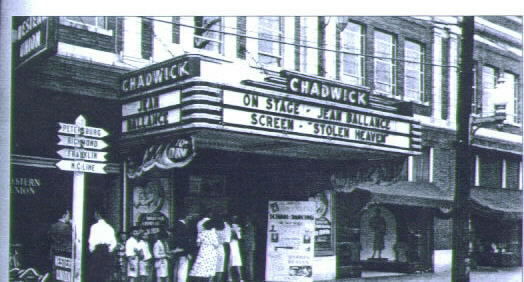 The Chadwick Theatre was opened January 26, 1925. In the 1940’s and into the 1950’s it was operated by Pitts' Theaters Inc. In later years it was renamed Magic Lantern Theatre.

In around 1982, the Magic Lantern Theatre was destroyed by a fire, which was arson (said to be an insurance job!) The last movie screened was said to be “Friday 13th Part 3”.

The front section of the theatre and the marquee survive today.

I first saw downtown Suffolk about 1988.Still had a lovely big hotel and a Leggett dept.store.Saw a bldg that looked like a closed theater.But the place now is useless.As the peanut has lost importance for the area and other ravages,Suffolk has not had much good happening.

Maybe if my elder siblings or anyone else has any recollections, I can pass them on.

There was a newspaper story here when the theater burned down. Arson was suspected from the start because the expensive projectors were not found in the ruins

I remember there was an illuminated clock to one side of the screen… something I never saw anywhere else. Movies I saw there: BACHELOR IN PARADISE, DOCTOR ZHIVAGO, and LADY SINGS THE BLUES. By the early 70’s it was not a place you wanted to be after dark.

I saw Jaws 2 there and Godzilla vs. Megalon. It was my favorite theater even though I hardly ever got to go there. The downtown area in the late 70’s and early 80’s just wasn’t a place to go at night. Well at least my parents thought so. Plus by this time it was starting to show adult films so it was definitely a theater my parents were not going to spend money at. I miss that bijou sign. In it’s place now stands a show store and it boasts a bijou as an apparent homage.

It was several years ago I must have stumbled across this site looking for info on the old Chadwick/Magic Lantern Theater. I provided the info on Friday the 13th Part 3 being the last movie screened. I believe I am correct on that. I am a huge horror fan and always wanted to see that film when it came to the Magic Lantern. However I was only 11 years old when it hit theaters.

Notes Note 1: The men arrested were the owners Note 2: Arson was suspected from the outset due to the fact that the projectors had been removed from the theatre prior to the fire.

The Chadwick Theatre opened on January 26, 1925. The house was one of several new theaters featured in a portfolio in the March 28 issue of Exhibitors Trade Review (scan at Internet Archive.)

Though the article failed to name the architect, it did say that the interiors were inspired by 16th century English architecture. With their beamed ceilings the auditorium and foyer did resemble the Tudor style more than anything else, though the screens for the $25,000 Wurlitzer Hope-Jones unit orchestra were sufficiently elaborate that they might have been more of a nod to the later Jacobean style.