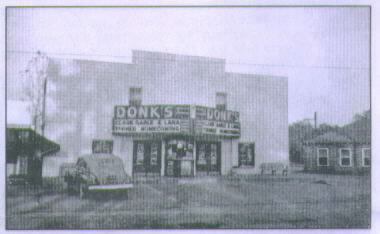 Opened on June 9, 1947, this true piece of Americana is the kind of old movie house or theater that the late Charles Kuralt would have stopped at and done a story on for his ‘On the Road’ series.

After years of showing movies, it was closed on October 3, 1970. Since then, it has been the home of Virginia’s Lil Ole Opry. Among the Nashville headliners who have appeared here are: Dolly Parton, Kitty Wells, Ernest Tubb, Mickey Gilley, Johnny Russell, etc. The 2001 Miss Virginia, Meghan Shanley, also got her start and was a regular there.

The theater is built of White Formstone and is ALL originial, right down to not being air-conditioned (even to this day), but still has it’s originial fans operating and all of it’s originial upholstered seats!

Donk’s Theatre is listed on the National Register of Historic Places.

On the evening of January 22, 2016, during a deadly snowstorm which hit the East Coast, the roof of Donk’s Theater collapsed under the weight of snow, and the side walls buckled. The owners stated the building will probably have to be demolished.

Here is another photo:
http://tinyurl.com/krp4tm

This theater has been placed on the National Register of Historic Places: View link

thanks Marvin nice intro on the theatre.

I attended a seminar on Mathews Theaters at the Historical Society the other night. The leader told us that the children of Donks were kicked out of the Be Jo Theater and barred for life for misbehaving. Mr. Dunton (Donk) had a verbal altercation with the Be Jo owner and told him he would build his kid his own theater and did right next door to his BBQ Stand just down the road from the Courthouse area. That is how Donk’s Theater came to life.

Historic theater was destroyed by the weight of the snow on it’s roof on Friday night during the ongoing blizzard.

Per the story: The building was placed on the National Register of Historic Places in 2011. According to the application submitted for it’s inclusion, “Donk’s Theatre was constructed in 1946-1947 and features vernacular commercial form design with Art Deco touches.” It was originally built as a movie theater, and operated in that capacity until 1970.